Australia employment is projected to increase 15.0K in December, but another above-forecast print may fuel the near-term advance in AUD/USD as it puts pressure on the Reserve Bank of Australia (RBA) to lift the cash rate off of the record-low.

It seems as though the RBA will retain the current policy at its first 2018-meeting on February 6 as ‘inflation remains low, with both CPI and underlying inflation running a little below 2 per cent,’ but Governor Philip Lowe and Co. may start to prepare Australian households and businesses for a less accommodative stance as ‘forward-looking indicators of labour demand suggested employment growth would be somewhat above average over the next few quarters.’

A batch of positive developments may encourage the RBA to adopt a hawkish tone as ‘spare capacity in the labour market was expected to be absorbed gradually and wage growth was expected to pick up over time,’ and AUD/USD may continue to exhibit a bullish behavior over the near-term especially as the Relative Strength Index (RSI) pushes into overbought territory for the first time since the summer months.

Nevertheless, a slew of lackluster data prints may tame the recent resilience in the Australian dollar as it curbs expectations for an imminent RBA rate-hike.

Australia added 61.6K jobs in November, with the expansion led by a 41.9K expansion in full-time positions, while part-time employment climbed 19.7K during the same period. A deeper look at the report showed the jobless rate holding steady at an annualized 5.4% as the labor force participation rate unexpectedly widened to 65.5% from a revised 65.2% in October, and the ongoing improvement in employment may encourage the Reserve Bank of Australia (RBA) to gradually alter the outlook for monetary policy in 2018 as the ‘central forecast remains for inflation to pick up gradually as the economy strengthens.’

The Australian dollar gained ground following the series of better-than-expected data prints, with AUD/USD climbing above the 0.7650 region to end the day at 0.7665. New to the currency market? Want a better understanding of the different approaches for trading? Start by downloading and reviewing the FREE DailyFX Beginners guide ! 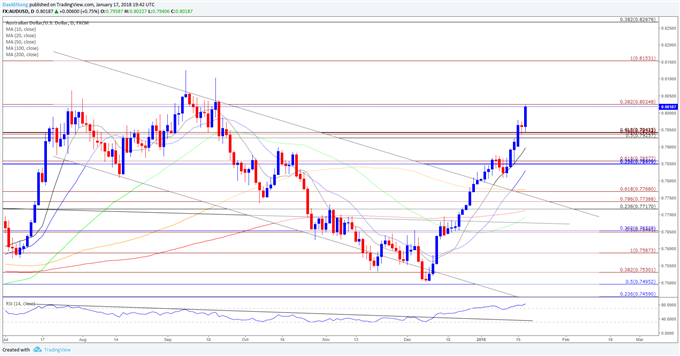