The advance 3Q U.S. Gross Domestic Product (GDP) report may generate a mixed market reaction as the growth rate is expected to narrow to an annualized 2.6%, while the core Personal Consumption Expenditure (PCE), the Fed’s preferred gauge for inflation, is anticipated to pick up during the same period.

Market participants are likely to pay increased attention to the inflation figures as the Federal Open Market Committee (FOMC) strives to achieve the 2% objective, and signs of heightening price pressures may generate a bullish reaction in the greenback especially as Chair Janet Yellen and Co. appear to be on course to deliver a December rate-hike.

However, a batch of lackluster data prints may dampen the appeal of the greenback as it undermines the Fed’s scope to implement higher borrowing-costs, and a growing number of central bank officials may start to project a more shallow path for the benchmark interest rate as ‘the low inflation readings this year might reflect not only transitory factors, but also the influence of developments that could prove more persistent.’

The U.S. economy grew an annualized 2.6% during the three-months through June, with the a deeper look at the report showing a downward revision for the 1Q print to1.2% from 1.4%. At the same time, the gauge for Personal Consumption increased 2.8% versus 1.9% during the first three-months of 2017, while the core Personal Consumption Expenditure, the Fed’s preferred gauge for inflation, slowed to 0.9% per annum from 1.8% during the same period. The U.S. dollar struggled to hold its ground following the mixed batch of data, with EUR/USD bouncing back from the 1.1715 region to end the day at 1.1749. 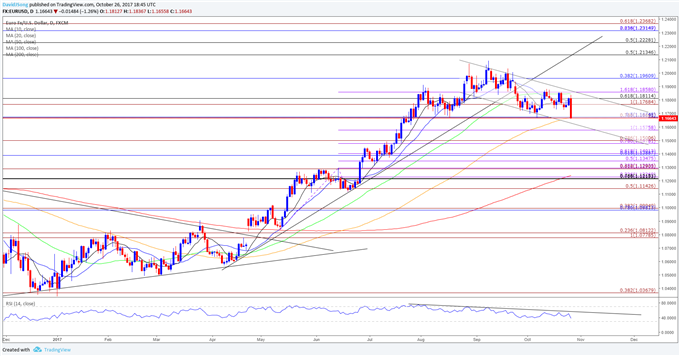 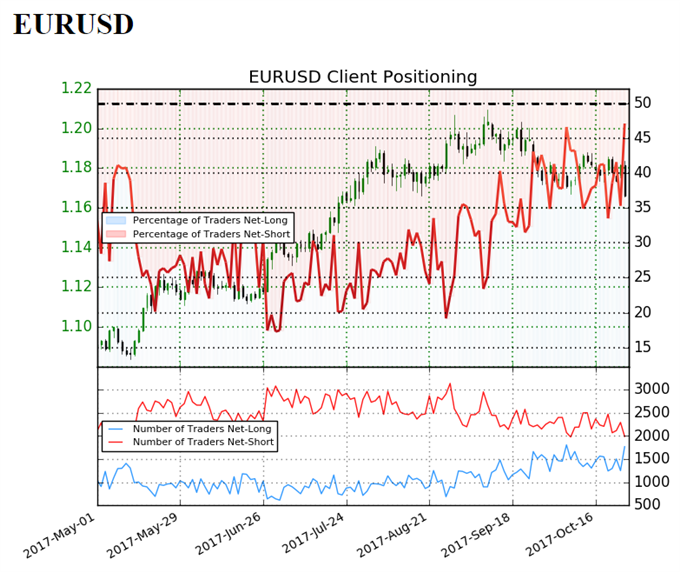 Retail trader data shows 47.1% of traders are net-long EUR/USD with the ratio of traders short to long at 1.12 to 1.