- Core Rate of Inflation to Slow from Fastest Pace of Growth Since 2015.

A fourth consecutive increase in Australia’s Consumer Price Index (CPI) may spark a bullish reaction in AUD/USD as it puts pressure on the Reserve Bank of Australia (RBA) to lift the cash rate off of the record-low.

The RBA may continue to change its tune as central bank officials forecast ‘a neutral nominal cash rate of around 3½ per cent,’ and Governor Philip Lowe and Co. may start to prepare Australian households and business for higher borrowing-costs as ‘the data available for the June quarter had generally been positive.’ However, another series of mixed data prints may drag on the Australian dollar as it encourages the RBA to preserve the current policy throughout 2017.

Australia’s Consumer Price Index (CPI) climbed an annualized 2.1% after expanding 1.5% during the last three-months of 2016, while the core rate of inflation increased 1.9% during the same period amid forecasts for a 1.8% print. Signs of slower-than-expected inflation may encourage the Reserve Bank of Australia (RBA) to preserve the record-low cash rate for the foreseeable future as ‘indicators of household consumption had been a little weaker than expected, which was consistent with softer conditions in the labour market.’ Despite the stickiness in the core rate, the Australian dollar lost ground following the CPI report, with AUD/USD slipping below the 0.7500 handle to end the day at 0.7472. 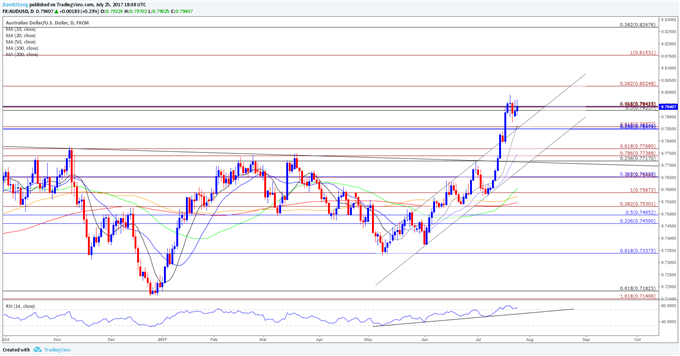