- Annualized Average Hourly Earnings to Pick Up for First Time Since February.

The U.S. Non-Farm Payrolls (NFP) report may tame the near-term advance in EUR/USD as both job and wage growth are projected to pick up in June.

With the U.S. economy nearing full-employment, signs of higher household earnings may boost the appeal of the greenback as it encourages the Federal Open Market Committee (FOMC) to further normalize monetary policy over the coming months. Chair Janet Yellen and Co. may endorse a more aggressive approach amid the growing discussion to unload the balance sheet, and the central bank may also stay on course to deliver three rate-hikes in 2017 as Fed officials now see the economy growing an annualized 2.2% this year. However, a batch of mixed data prints may produce headwinds for the greenback as it drags on interest-rate expectations.

Impact that the U.S. NFP report has had on EUR/USD during the previous print

U.S. Non-Farm Payrolls (NFP) increased 138K in May after expanding a revised 174K the month prior, while the jobless rate unexpected narrowed to an annualized 4.3% from 4.4% as the Labor Force Participation Rate slipped to 62.7% from 62.9% during the same period. In addition, Average Hourly Earnings missed market expectations as the figure held steady at an annualized 2.5% for the second-month, and the ongoing weakness in household earnings may force the Federal Open Market Committee (FOMC) to buy more time as the central bank struggles to achieve the 2% target for inflation. The greenback lost ground following the mixed data prints, with EUR/USD clearing the 1.1250 region to end the day at 1.1280. 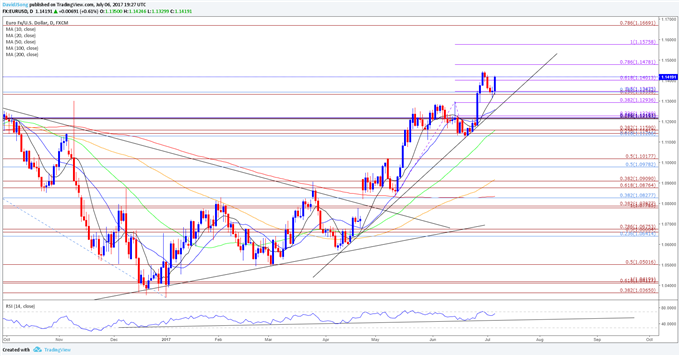 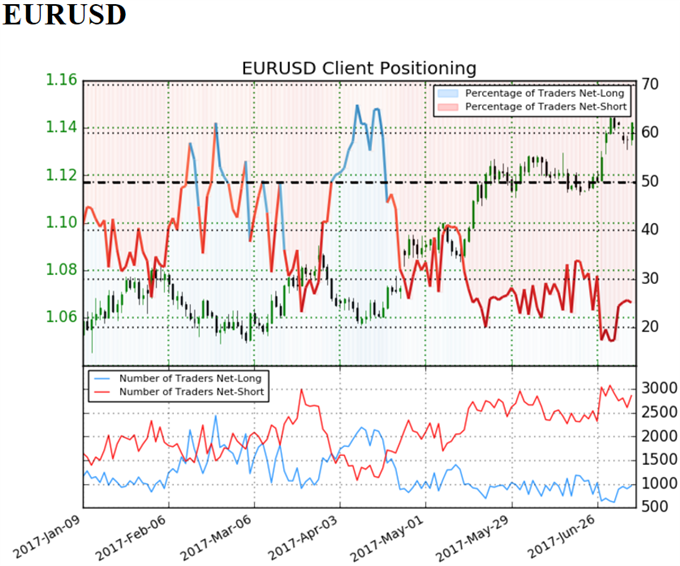 Retail trader data shows 25.2% of traders are net-long EUR/USD with the ratio of traders short to long at 2.97 to 1. In fact, traders have remained net-short since April 18 when EUR/USD traded near 1.06424; price has moved 7.3% higher since then. The number of traders net-long is 10.1% lower than yesterday and 31.4% higher from last week, while the number of traders net-short is 8.8% higher than yesterday and 2.8% lower from last week. For more information on retail sentiment, check out the new gauge developed by DailyFX based on trader positioning.