- Employment Component Climbed to 57.8 in May- Highest Reading Since 2015.

A second consecutive decline in the ISM Non-Manufacturing survey may produce a bearish reaction in the U.S. dollar as waning business confidence dampens the outlook for growth and inflation.

Mixed signals coming out of the U.S. economy may continue to complicate the Fed’s normalization cycle especially as the central bank struggles to achieve the 2% target for price growth. In turn, Chair Janet Yellen and Co. may try to buy more time at the next interest rate decision on July 26, and the central bank may look to unload the balance sheet in 2018 as ‘contacts at some large firms indicated that they had curtailed their capital spending, in part because of uncertainty about changes in fiscal and other government policies.’ Nevertheless, an unexpected pickup in the ISM survey may keep the FOMC on course to deliver three rate-hikes in 2017 as officials see the real economy expanding an annualized 2.2% this year.

The ISM Non-Manufacturing survey narrowed to 56.9 from 57.5 in April, while the employment component climbed to 57.8 from 51.4 during the same period to mark the highest reading since June 2015. A deeper look at the report showed the gauge for new orders slipped to a six-month low of 57.7 in May, with the Business Activity index highlighting a similar dynamic as it slipped to 60.7 from 62.4 in April. The mixed developments sparked a limited reaction in the greenback, with EUR/USD edging marginally higher during the North American trade to end the day at 1.1254. 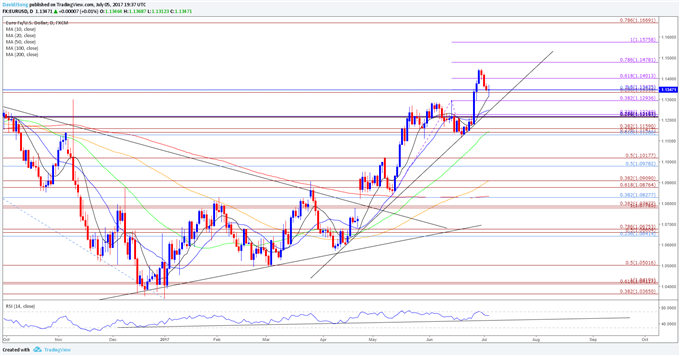 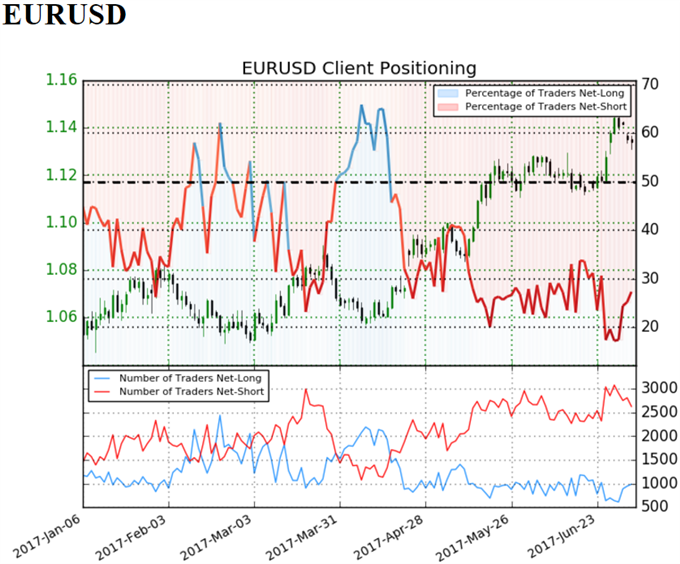 Retail trader data shows 27.4% of traders are net-long EUR/USD with the ratio of traders short to long at 2.66 to 1. In fact, traders have remained net-short since April 18 when EUR/USD traded near 1.06424; price has moved 6.6% higher since then. The number of traders net-long is 0.5% higher than yesterday and 27.9% higher from last week, while the number of traders net-short is 7.1% lower than yesterday and 4.6% lower from last week. For more information on retail sentiment, check out the new gauge developed by DailyFX based on trader positioning.