-Will Governor Philip Lowe Continue to Endorse a Wait-and-See Approach?

The Reserve Bank of Australia (RBA) interest rate decision may drag on AUD/USD as the central bank appears to be in no rush to lift the official cash rate off of the record-low.

Governor Philip Lowe & Co. may merely try to buy more time as ‘slow growth in real wages is restraining growth in household consumption,’ and the central bank may stay on the sidelines throughout the remainder of the year as ‘the outlook continues to be supported by the low level of interest rates.’ However, the RBA may gradually change its tune in the second-half of 2017 as ‘the transition to lower levels of mining investment following the mining investment boom was almost complete,’ and a hawkish policy statement may trigger a bullish reaction in the Australia dollar as it boosts interest-rate expectations.

As expected, the Reserve Bank of Australia (RBA) kept the official cash rate at the record-low of 1.50% in June, and it seems as though Governor Philip Lowe and Co. remains in no rush to normalize monetary policy as ‘slow growth in real wages is restraining growth in household consumption.’ Even though officials note ‘the transition to lower levels of mining investment following the mining investment boom is almost complete,’ the central bank may retain the wait-and-see approach throughout 2017 as ‘the outlook continues to be supported by the low level of interest rates.’ The initial market reaction was short-lived, with AUD/USD largely holding its ground throughout the day as the pair closed at 0.7507. 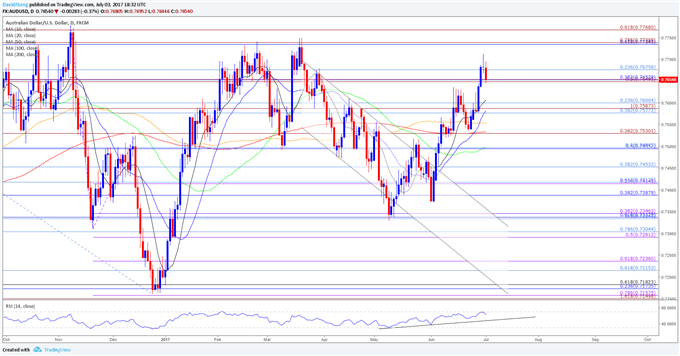 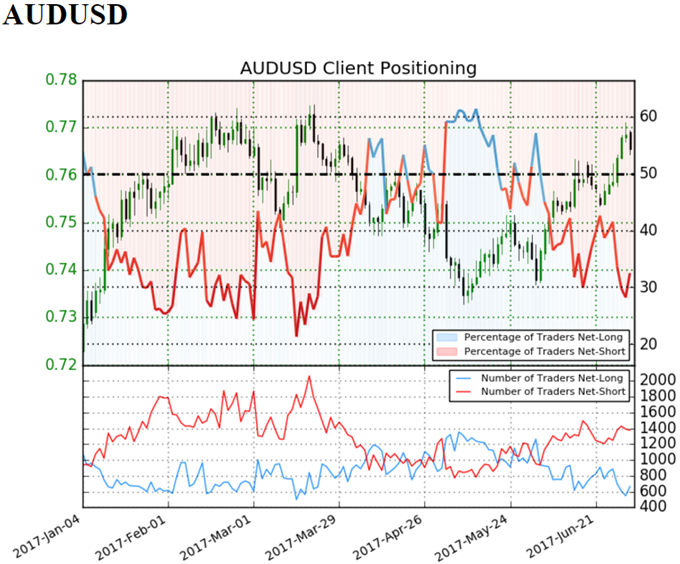 Retail trader data shows 32.5% of traders are net-long with the ratio of traders short to long at 2.08 to 1. In fact, traders have remained net-short since Jun 04 when AUDUSD traded near 0.73799; price has moved 3.7% higher since then. The number of traders net-long is 14.1% higher than yesterday and 23.3% lower from last week, while the number of traders net-short is 1.3% lower than yesterday and 8.4% higher from last week.For more information on retail sentiment, check out the new gauge developed by DailyFX based on trader positioning.