- Will Governor Wheeler Toughen the Verbal Intervention on Kiwi?.

After reducing the official cash rate to a fresh record-low of 1.75% in November, the Reserve Bank of New Zealand (RBNZ) is widely expected to endorse a wait-and-see approach at its first policy meeting for 2017, but the fresh batch of central bank commentary may curb the near-term advance in NZD/USD should Governor Graeme Wheeler and Co. show a greater willingness to further embark on the easing-cycle.

With Governor Wheeler’s tenure set to expire in September, the RBNZ may toughen the verbal intervention and further insulate New Zealand economy before the departure as the central bank struggles to achieve its 1 to 3 percent target-range for inflation. In turn, officials may sound increasingly cautious this time around and stress ‘numerous uncertainties remain, particularly in respect of the international outlook, and policy may need to adjust accordingly,’ but a more balanced tone may keep NZD/USD afloat over the near-term especially as the Federal Reserve remains in no rush to further normalize monetary policy.

Weak job/wage growth accompanied by the slowdown in the housing market may push Governor Wheeler and Co. to endorse a dovish outlook for monetary policy, and the New Zealand dollar stands at risk of facing a bearish reaction should the policy statement drag on interest-rate expectations.

However, the upbeat 3Q Gross Domestic Product (GDP) report paired with signs of stronger price growth may encourage the RBNZ to adopt an improved outlook for the region, and the kiwi-dollar may extend the advance from earlier this year should the central bank talk down speculation for more easing. 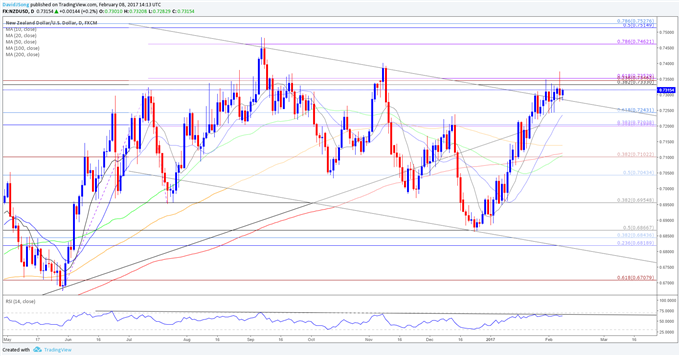 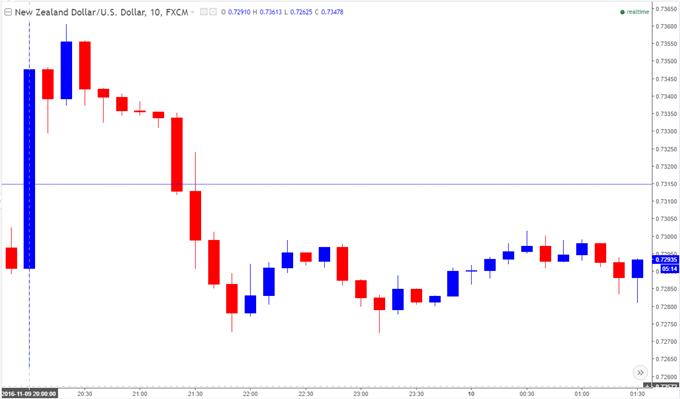 The Reserve Bank of New Zealand (RBNZ) reduced the official cash rate to a fresh record-low of 1.75% at its last policy meeting for 2016, but it seems as though the central bank is in no rush to further support the real economy as ‘current projections and assumptions indicate that policy settings, including today’s easing, will see growth strong enough to have inflation settle near the middle of the target range.’ Nevertheless, Governor Graeme Wheeler and Co. went onto say that ‘numerous uncertainties remain, particularly in respect of the international outlook, and policy may need to adjust accordingly,’ and the central bank may keep the door open to further embark on its easing-cycle amid the ongoing slack in the global economy. NZD/USD bounced back from 0.7263 as the RBNZ endorsed a wait-and-see approach for monetary policy, but the New Zealand dollar struggled to hold its ground throughout the day, with the pair closing at 0.7213.