- Core Rate of Inflation to Slow to Annualized 1.6%- Slowest Pace Since Series Began in 1983.

A pickup in Australia’s Consumer Price Index (CPI) may fuel the near-term advance in AUDUSD as it puts pressure on the Reserve Bank of Australia (RBA) to move away from its easing-cycle, but a slowdown in the core rate of inflation may drag on the local currency as it sparks bets for additional monetary support.

It seems as though the RBA remains fairly comfortable with holding the benchmark interest rate at 1.50% for the foreseeable future as the current stance is ‘consistent with sustainable growth in the economy and achieving the inflation target over time,’ but Governor Philip Lowe and Co may keep the door open to further insulate the economy as ‘inflation is expected to remain low for some time.’ In turn, a fresh record-low reading for the core rate of inflation may shake up the near-term outlook for AUD/USD and influence the RBA’s next interest rate decision on February 7 as the disinflationary environment is ‘expected to remain the case for some time.’

Faster job growth accompanied by the expansion in private-sector credit may prop up consumer prices, and a strong CPI print may trigger a bullish reaction in the Australian dollar as it boosts interest rate expectations.

Nevertheless, subdued wage growth paired with slowdown in household spending may encourage Australian firms to offer discounted prices, and a dismal development may produce near-term headwinds for the local currency as it fosters speculation for more RBA easing. 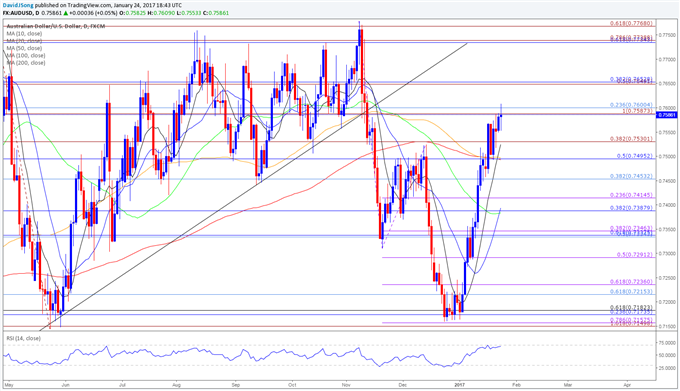 Australia’s Consumer Price Index (CPI) climbed an annualized 1.3% during the three-months through September after expanding 1.0% during the second-quarter, while the core rate of inflation held steady at 1.7% for the third consecutive quarter. Despite the stronger-than-expected print, the Reserve Bank of Australia (RBA) appears to be in no rush to remove the highly accommodative policy stance as the central bank argues the current stance is ‘consistent with sustainable growth in the economy and achieving the inflation target over time,’ and Governor Philip Lowe may endorse a wait-and-see approach in 2017 as price growth continues to run below target. The Australia dollar popped higher following the inflation report, with AUD/USD taking out the 0.7700, but the market reaction unraveled throughout the day, with the pair closing at 0.7648.