Another 5.0K rise in U.K. Jobless Claims may produce near-term headwinds for the British Pound as it casts a weakened outlook for growth, but signs of stronger wage growth may undermine the bearish sentiment surrounding sterling as the Bank of England (BoE) changes its tune for monetary policy.

Heightening price pressures in the U.K. may prompt the BoE to adopt a more hawkish tone in 2017 especially as Governor Mark Carney anticipates a ‘notable increase in inflation,’ and the central bank may show a greater willingness to gradually move away from its easing-cycle as officials warn ‘monetary policy can respond, in either direction, to changes to the economic outlook as they unfold to ensure a sustainable return of inflation to the 2% target.’ However, the Monetary Policy Committee (MPC) may have little choice but to tolerate above-target inflation especially as the U.K. prepares to leave the European Union, and a batch of mixed data prints may spark a limited market reaction as the BoE looks poised to retain the current policy at the next ‘Super Thursday’ interest rate decision on February 2.

Easing factory-gate prices accompanied by the pickup in retail spending may encourage U.K. firms to expand their labor force, and data prints pointing to stronger job/wage growth may spark a bullish reaction as it boosts interest-rate expectations.

However, the slowdown in building activity paired with slowing demands from abroad may drag on employment, and a dismal development may undermine the near-term rebound in GBP/USD as puts pressure on the BoE to further support the real economy. 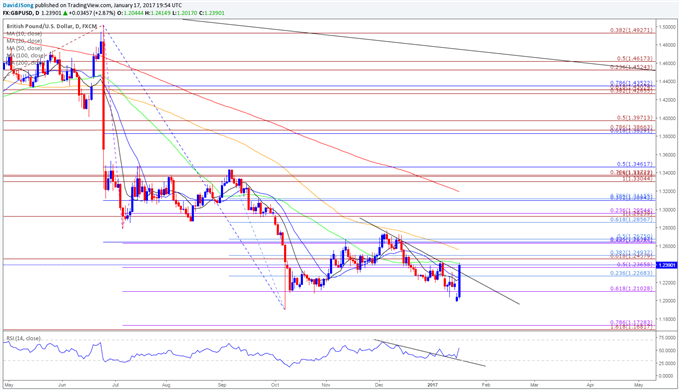 U.K. Jobless Claims increased another 2.4K in November after climbing a revised 13.3K the month prior, while the jobless rate under the International Labour Organization’s methodology held steady at an annualized 4.8% for the second consecutive month in October. Moreover, employment unexpectedly narrowed 6K during the three-months through October amid forecasts for a 50K rise, while Average Hourly Earnings climbed an annualized 2.5% during the same period after advancing a revised 2.4% in September. The British Pound edged lower following the series of mixed data prints, with GBP/USD coming under increased selling pressure during the North American trade, with the pair ending the day at 1.2561.