Even though the Federal Open Market Committee (FOMC) is widely expected to vote in favor for a December rate-hike, Chair Janet Yellen and Co. may largely endorse a wait-and-see approach for 2017 as‘the federal funds rate is likely to remain, for some time, below levels that are expected to prevail in the longer run.’

The fresh projections coming out of the central bank is likely to take center stage as the rotation within the FOMC (Chicago Fed President Charles Evans, Philadelphia Fed President Patrick Harker, Dallas Fed President Robert Kaplan and Minneapolis Fed President Neel Kashkari) clouds the monetary policy outlook going into 2017, and a further reduction in the longer-run interest rate forecast may undermine the bullish sentiment surrounding the greenback should central bank officials increase their efforts to tame market speculation. With Fed Funds Futures highlighting a 60% probability for another move in June 2017, a shift in interest rate expectations may heavily influence U.S. dollar price action over the remainder of the year especially as Chair Yellen remains in no rush to remove the accommodative policy stance.

Improved confidence paired with the pickup in private-sector activity may encourage the FOMC to further normalize monetary policy in 2017, and the post-election USD rally may gather pace over the remainder of the year should central bank officials continue to forecast a terminal interest rate close to 3.00%.

However, the Fed may continue to warn ‘market-based measures of inflation compensation have moved up but remain low; most survey-based measures of longer-term inflation expectations are little changed, on balance, in recent months’ amid the mixed data coming out of the U.S. economy, and the dollar may face a near-term correction should the central bank scale back the interest rate forecast and soften its hawkish outlook for monetary policy. 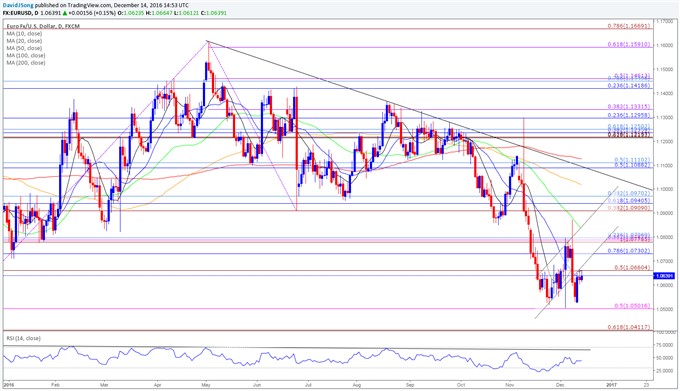 Check out the short-term technical levels that matter for EUR/USD heading into the meeting!

The Federal Open Market Committee (FOMC) stuck to the sidelines in November, with Kansas City Fed President Esther George and Cleveland Fed President Loretta Mester going against the majority as the two dissenters voted for a 25bp rate-hike. Despite the wait-and-see approach, it seems as though Chair Janet Yellen and Co. are following a similar path to 2015 and appear on their way to deliver a December rate-hike as ‘the Committee judges that the case for an increase in the federal funds rate has continued to strengthen.’ Despite increased efforts to prepare U.S. households and businesses for higher borrowing-costs, market participants showed a limited reaction to the fresh batch of central bank rhetoric, with EUR/USD struggling to hold above the 1.1100 handle as the pair ended the day at 1.1097.