Improving U. of Michigan Survey to Propel Post-ECB EUR/USD Losses

- U. of Michigan Confidence to Increase for Second Straight Month in December.

Another uptick in the U. of Michigan Confidence survey may fuel the bullish sentiment surrounding the greenback and spark further loss in EUR/USD should the data print highlight an improved outlook for the U.S. economy.

With Fed Funds Futures now pricing a greater than 95% probability for a December rate-hike, Chair Janet Yellen and Co. appears to be on course to further normalize monetary policy in 2017 as central bank officials warn the ‘case for an increase in the federal funds rate has continued to strengthen.’ Expectations for higher interest rates should keep the U.S. dollar float going into the year ahead, but a dismal development may push the Federal Open Market Committee (FOMC) to take an even more gradual approach in removing the accommodative policy stance as the central bank warns ‘inflation has increased somewhat since earlier this year but is still below the Committee's 2 percent longer-run objective.’

Signs of a stronger recovery may boost U.S. consumer confidence, and another pickup in the U. of Michigan survey may spark a bullish reaction in the greenback as it puts increased pressure on the Federal Reserve to implement higher borrowing-costs.

However, stagnant wages accompanied by easing job growth may drag on household sentiment, and an unexpected decline in the index may produce near-term headwinds for the dollar as it drags on interest-rate expectations.

Bullish USD Trade: U. of Michigan Confidence Index Advance to 94.5 or Greater 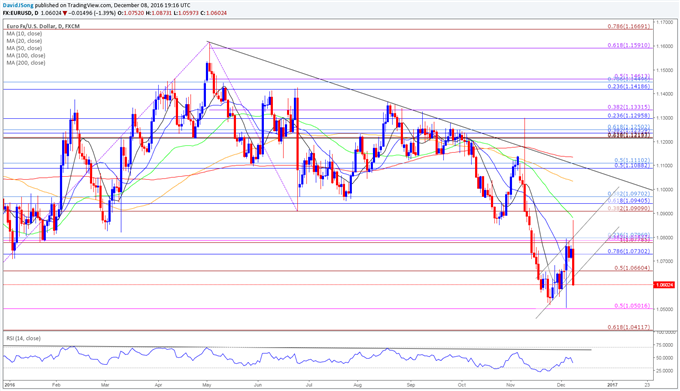 Check out the short-term technical levels that matter for GBP/USD heading into the release!

Impact the U. of Michigan Confidence survey has had on EUR/USD during the last release

November 2016 U. of Michigan Confidence

The U. of Michigan Confidence survey climbed to 91.6 from 87.2 in October, while 12-month inflation expectations held steady at an annualized 2.4% for the third-month following a downward revision from the advance reading. The ongoing improvement in household sentiment may push the Federal Reserve to follow a similar to 2015 as the central bank appears to be on course for a December rate-hike, but Chair Janet Yellen may largely endorse a wait-and-see approach for the first-half of 2017 as central bank officials warn ‘market-based measures of inflation compensation have moved up but remain low; most survey-based measures of longer-term inflation expectations are little changed, on balance, in recent months.’ The greenback gained ground following the better-than-expected print, with EUR/USD pulling back from the 1.0880 region to end the day at 1.0854.

S&P 500: Will the Market Respect Support This Week?