- Unemployment Rate to Hold at Annualized 4.9% for Second Month.

A 180K rise in U.S. Non-Farm Payrolls (NFP) may fuel the bullish sentiment surrounding the greenback and trigger a pullback in EUR/USD should the report put increased pressure on the Federal Reserve to further normalize monetary policy.

With the Federal Open Market Committee (FOMC) widely anticipated to lift the benchmark interest rate at the December 14 meeting, a further improvement in labor market dynamics may encourage the central bank to implement higher borrowing-costs in 2017 especially as the U.S. economy approaches ‘full-employment.’ However, Chair Janet Yellen and Co. may make further attempts to buy more time as officials warn ‘market-based measures of inflation compensation have moved up but remain low; most survey-based measures of longer-term inflation expectations are little changed, on balance, in recent months,’ and the permanent voting-members may largely endorse a wait-and-see approach going into the year ahead as ‘the federal funds rate is likely to remain, for some time, below levels that are expected to prevail in the longer run.’

Improved business confidence accompanied by resilience in private-sector consumption may push U.S. firms to expand their labor force, and an upbeat NFP report may spark a bullish reaction in the greenback as it puts increased pressure on the FOMC to raise the benchmark interest rate in 2017.

Nevertheless, easing production paired with the widening trade deficit may drag on the U.S. labor market, and another weaker-than-expected employment print may undermine the near-term strength in the dollar as it drags on interest-rate expectations. 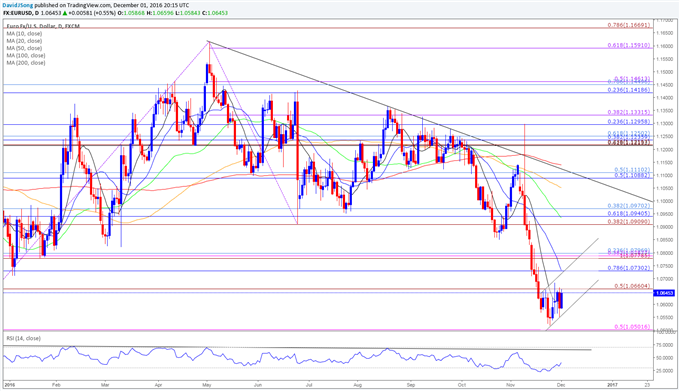 The U.S. economy added another 161K jobs in October following a revised 191K expansion the month prior, while the jobless rate narrowed to an annualized 4.9% from 5.0% during the same period. At the same time, the Labor Force Participation Rate down ticked to 62.8 from 62.9% in September, while Average Hourly Earnings climbed 2.8% per annum to mark the fastest pace of growth since June 2009. The ongoing improvement in the labor market accompanied by the pickup in household earnings may push the Federal Reserve to deliver a December rate-hike as the data prints foster an improved outlook for growth and inflation. The greenback gained ground following the overall improvement in labor market dynamics, but the market reaction was short-lived, with EUR/USD bouncing back from 1.1080 to end the day at 1.1139.