Another pickup in the U.K. Consumer Price Index (CPI) may boost the appeal of the British Pound and fuel a larger relief rally in GBP/USD as the Bank of England (BoE) drops its dovish outlook for monetary policy and becomes increasingly concerned about overshooting the 2% target for inflation.

Heightening price pressures may keep the BoE on the sidelines for the foreseeable future as the central bank now warns ‘monetary policy can respond, in either direction,’ and Governor Mark Carney and Co. may largely endorse a wait-and-see approach for 2017 as officials argue ‘there are limits to the extent to which above-target inflation can be tolerated.’ However, a marked slowdown in the core CPI may undermine the recent recovery in GBP/USD as the fundamental outlook for the U.K. remains clouded with high uncertainty, and the BoE may have little choice but to further insulate the real economy as the new government under Prime Minister Theresa May remain on course to depart from the European Union (EU).

The ongoing improvement in the labor market accompanied by signs of a stronger-than-expected growth may encourage U.K. firms to boost consumer prices, and another uptick in the headline reading for inflation may spark a bullish reaction in the sterling as market participants scale back bets for additional monetary support.

However, weak consumption paired with the slowdown in private-sector lending may drag on price growth, and a dismal development may undermine the near-term rebound in the pound-dollar as it provides the BoE’s with greater scope to further embark on its easing-cycle. 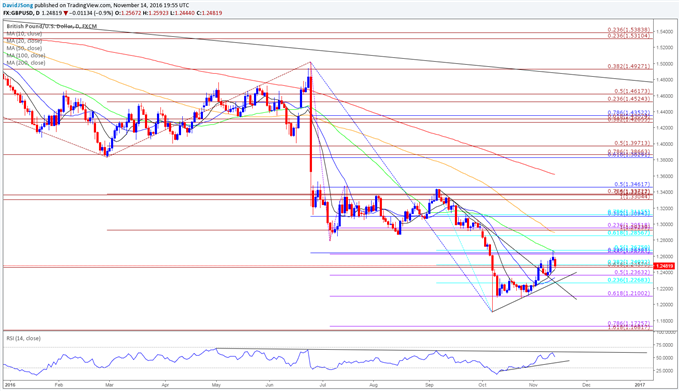 The U.K. Consumer Price Index (CPI) advanced an annualized 1.0% in September after expanding 0.6% the month prior, while the core rate of inflation climbed 1.5% per annum amid forecasts for a 1.4% print. A deeper look at the report showed a 5.9% rise in the cost of education paired with a 1.0% rise in prices for clothing & footwear, while transportation costs also climbed 1.2% during the same period following a 1.0% rise in August. The British Pound regained its footing following the mixed market reaction, with GBP/USD bouncing back from 1.2229 to end the day at 1.2292.