- Will Governor Stephen Poloz and Co. Trim Their Economic Forecasts?

The Canadian dollar may show a limited reaction to the Bank of Canada’s (BoC) October interest rate decision as Governor Stephen Poloz and Co. are expected to retain the current policy, but the near-term decline in USD/CAD may largely unravel should the monetary policy report fuel bets for more easing.

The BoC may show a greater willingness to implement lower borrowing-costs as the ‘risks to the profile for inflation have tilted somewhat to the downside since July,’ and a reduction in the central bank’s economic projections may drag on the local currency as market participants boosts bets for additional monetary support. However, Governor Poloz and Co. may continue to advocate a wait-and-see approach as the central bank anticipates a ‘substantial rebound’ in the second-half of 2016, and the fresh comments may boost the appeal of the Canadian dollar should the committee sound upbeat this time around.

The ongoing expansion in the housing market accompanied by the sharp pickup in employment may push the BoC to raise its fundamental assessment of the real economy, and the Canadian dollar may face a bullish reaction should Governor Poloz talk down bets for a rate-cut.

However, waning price pressures paired with the slowdown in private-sector consumption may sway the BoC to reestablish its easing cycle, and the dollar-loonie may work its way back towards the monthly high (1.3313) should the fresh developments coming out of the central bank fuel expectations for lower borrowing-costs. 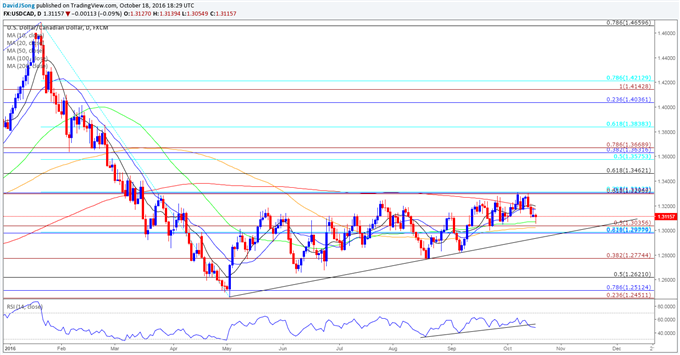 The Bank of Canada (BoC) stuck to the sidelines and held the benchmark interest rate at 0.50% in September even as the central bank warned the ‘risks to the profile for inflation have tilted somewhat to the downside since July.’ Governor Stephen Poloz and Co. largely endorse a wait-and-see approach for monetary policy as the central bank anticipates a ‘substantial rebound in the second half of this year,’ and it seems as though the BoC will continue to lean of fiscal authorities to support the real economy as ‘the overall balance of risks remains within the zone for which the current stance of monetary policy is appropriate.’ Nevertheless, the Canadian dollar struggled to hold its ground following the dovish remarks, with USD/CAD climbing above the 1.2850 region to end the day at 1.2883.