- Will the Governing Council Adjust/Extend the Non-Standard Measures?

Even though the European Central Bank (ECB) is widely anticipated to retain its current policy in October, the EUR/USD may face a sharp move should President Mario Draghi & Co. take additional steps to further support the monetary union.

After cutting the growth forecast in September, the Governing Council may push out the deadline for its quantitative easing (QE) program and adjust the guidelines of its non-standard measures in an effort to encourage a stronger recovery. However, more of the same from the ECB may trigger a bullish reaction in the single-currency should the central bank stick to the March 2017 deadline for its asset-purchases.

Subdued price growth accompanied by signs of a slowing recovery may push the ECB to broaden the scope of its non-standard programs, and a surprise move by the central bank may drag on the single-currency as the central bank continues to push monetary policy into unchartered territory.

Nevertheless, improved confidence paired with the pickup in the terms of trade may force the Governing Council to retain the current policy, and the Euro may stage a larger recovery should the central bank talk down expectations for an imminent move. 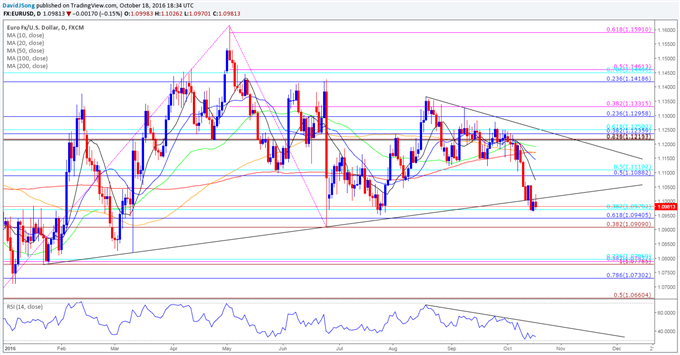 The European Central Bank (ECB) stuck to the sidelines in September, with President Mario Draghi largely endorsing a wait-and-see approach for monetary policy as the Governing Council continues to monitor the impact of the zero-interest rate policy (ZIRP). Nevertheless, the ECB kept the door open to further embark on its easing cycle as the central bank curbed its growth forecast for the policy horizon, and the Governing Council may continue to push monetary policy into unchartered territory as they struggle to achieve their one and only mandate for price stability. The initial move in the Euro was short-lived, with EUR/USD struggling to hold above the 1.1300 handle as the pair closed the day at 1.1255.