Another 170K expansion in U.S. Non-Farm Payrolls (NFP) may fuel the near-term strength in the greenback and spark a bearish reaction in EUR/USD as it boost bets for a December Fed rate-hike.

It seems as though the Federal Open Market Committee (FOMC) is following a similar path to 2015 as central bank officials appear to be taking a more collective approach in preparing U.S. households and businesses for higher borrowing-costs, and the U.S. dollar may appreciate over the remainder of the year amid growing bets for a 2016 rate-hike. However, the reduction in the Fed’s long-run interest rate forecast may curtail the bullish outlook for the greenback as Chair Janet Yellen endorses a ‘gradual’ approach in removing the accommodative policy, and the 2017 voting-members may embrace a more dovish outlook for monetary policy as the committee struggles to achieve the 2% target for inflation.

The ongoing decline in planned job-cuts accompanied by the expansion in service-based activity, one of the leading drivers of growth, may generate a stronger-than-expected NFP report, and a positive development may boost interest-rate expectations especially as the U.S. economy approaches ‘full-employment.’

However, the slowdown in building activity paired with the weakness in household consumption may drag on job growth, and a dismal employment report may spark a near-term headwinds for the dollar as push out bets for the next Fed rate-hike. 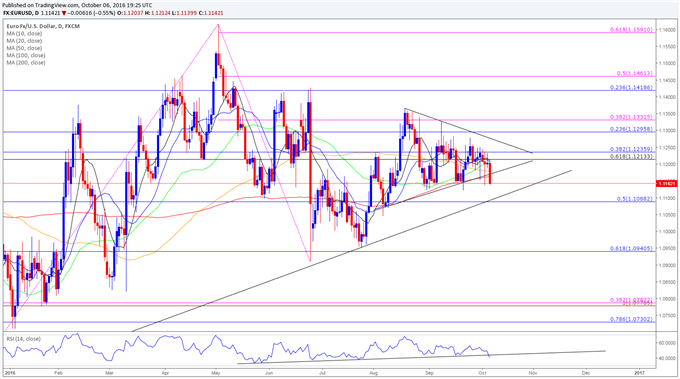 The U.S. economy added another 151K jobs in August followed a revised 275K expansion the month prior, while the jobless rate held steady at an annualized 4.9% for the second consecutive month. The Labor Force Participation Rate once again printed at 62.8% during the same period, while Average Hourly Earnings narrowed to an annualized 2.4% amid forecasts for a 2.5% print. The initial weakness in the greenback was short-lived, with EUR/USD pulling back from the 1.1250 region to end the day at 1.1151.

COT-4th Most Selling by CAD Speculators Since at Least 2002