- Bank of England (BoE) to Preserve Record-Low Interest Rate, GBP 435B in QE.

- Will BoE Governor Mark Carney Endorse a Wait-and-See Approach for Rest of 2016?

The Bank of England (BoE) interest rate decision may trigger a short-squeeze in British Pound and generate a relief rally in GBP/USD should the central bank talk down bets for an imminent rate-cut.

Even though the Monetary Policy Committee (MPC) warns ‘a majority of members expect to support a further cut in Bank Rate to its effective lower,’ the BoE may preserve the current policy throughout the remainder of the year as there appears to be a limited risk for a U.K. recession. With Deputy Governor Minouche Shafik scheduled to depart in February, Governor Mark Carney and Co. may endorse a wait-and-see approach for the foreseeable future as the central bank sees a risk of overshooting the 2% inflation-target over the policy horizon.

Signs of stronger consumption accompanied by the pickup in private investment may encourage the BoE to soften its dovish outlook for monetary policy, and the British Pound may face a bullish reaction following the fresh slew of central bank rhetoric should the committee talk down bets for an imminent rate-cut.

Nevertheless, weak household earnings paired with the slowdown in job growth may push the BoE to further support the real economy, and the sterling may largely give back the rebound from August should the central bank show a greater willingness to further embark on its easing cycle in 2016. 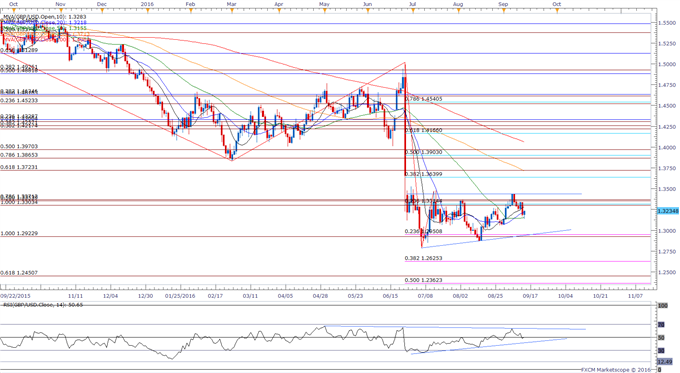 The Bank of England (BoE) reestablished its easing cycle in August, with the central bank announcing a ‘a 25 basis point cut in Bank Rate to 0.25%; a new Term Funding Scheme to reinforce the pass-through of the cut in Bank Rate; the purchase of up to £10 billion of UK corporate bonds; and an expansion of the asset purchase scheme for UK government bonds of £60 billion, taking the total stock of these asset purchases to £435 billion.’ Indeed, the Monetary Policy Committee (MPC) kept the door open to further support the real economy as ‘a majority of members expect to support a further cut in Bank Rate to its effective lower,’ but the fresh comments suggest Governor Mark Carney and Co. are ruling out a zero-interest rate policy (NIRP) for the U.K. as the central bank sees a risk of overshooting the 2% inflation-target over the policy horizon. The British Pound sold-off following the meaning easing package, with GBP/USD breaking below the 1.3200 handle to end the day at 1.3104.