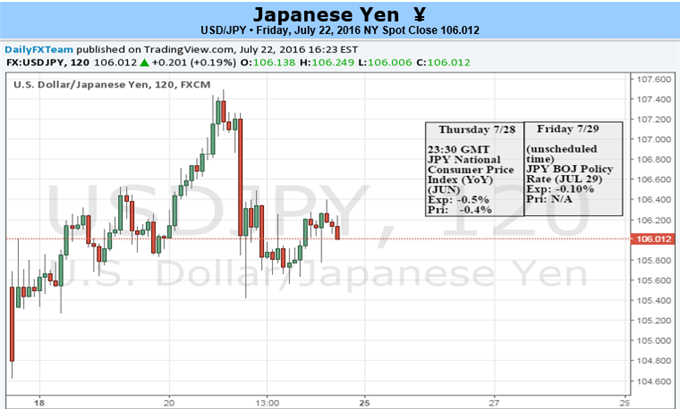 The diverging paths between the Federal Open Market Committee (FOMC) and the Bank of Japan (BoJ) may encourage market participants to adopt a long-term bullish bias for USD/JPY, but the fresh batch of central bank rhetoric may heavily impact the near-term outlook should the policy statements show a greater willingness to retain the status quo.

Even though the advance 2Q U.S. Gross Domestic Product (GDP) report is anticipated to show a meaningful pickup in economic activity, forecasts for a slowdown in the core Personal Consumption Expenditure (PCE), the Fed’s preferred gauge for price growth, may push the committee to buy more time as officials argue market-based measures of inflation compensation weak, while ‘most survey-based measures of longer-term inflation expectations are little changed.’ In turn, another unanimous vote to retain the current policy may produce headwinds for the greenback, with the dollar-yen at risk of giving back the advance from earlier this month as market participants continue to push out bets for the next Fed rate-hike.

At the same time, the BoJ may stick to the sidelines as Prime Minister Shinzo Abe pledges to unveil a ‘bold’ fiscal stimulus package to encourage a stronger recovery, and Governor Haruhiko Kuroda may continue to defy market expectations as the central bank head appears to be ruling out the possibility for ‘helicopter money.’ With that said, the BoJ may keep the door open to further embark on its easing cycle, but more of the same from the central bank may derail speculation for more non-standard measures as the board continues to monitor the impact of the negative-interest rate policy (NIRP). Moreover, the weakening outlook for the global economy may spur greater demand for the Yen as Japan’s Balance of Payments (BoP) report is anticipated to show the Trade Balance returning to a surplus in June, and USD/JPY may largely conform to the downward trend from earlier this year as the region turns to its historical role as a net-lender to the rest of the world. 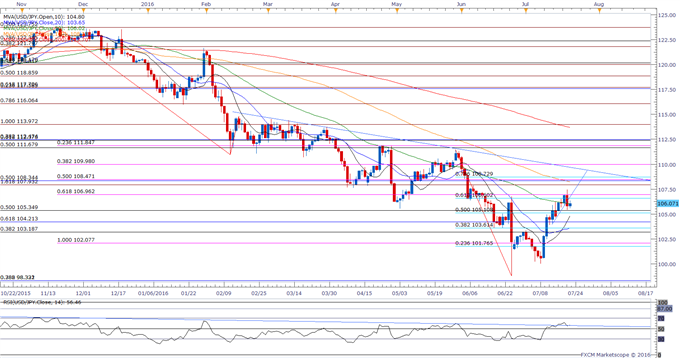