- Canada Employment to Increase for Second Time in 2016.

- Jobless Rate to Climb to Annualized 7.2%- Highest Reading Since February.

Despite forecasts for an uptick in the jobless rate, a 1.8K rebound in Canada Employment may heighten the appeal of the loonie and spur a near-term decline in USD/CAD as the data highlights an improved outlook for growth and inflation.

Even though the Bank of Canada (BoC) retains a cautious outlook for the real economy, Governor Stephen Poloz and Co. may stick to the sidelines throughout 2016 and show a greater willingness to gradually move away from its easing cycle especially as Prime Minister Justin Trudeau implements fiscal support to encourage a stronger recovery.

The ongoing expansion in the housing market accompanied by signs of growing business outputs may generate a meaningful rebound in job growth, and a positive employment report may spur a bullish reaction in the Canadian dollar as market participants scale back bets for a BoC rate-cut.

Nevertheless, waning demand from home and abroad may drag on hiring, and another unexpected contraction in Canadian employment may drag on the loonie as it renews speculation for additional monetary support. 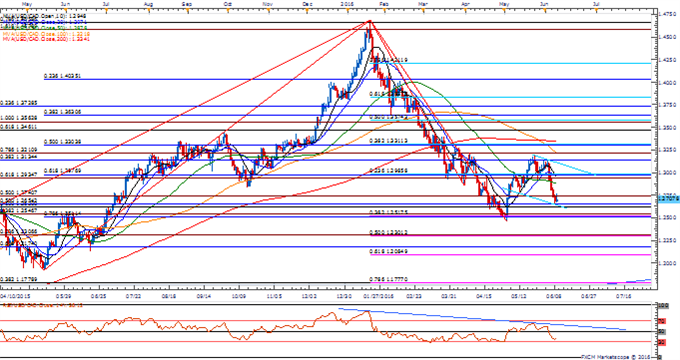 The Canadian economy unexpectedly shed 2.1K jobs in April following the 40.6K expansion the month prior, while the jobless rate held steady at an annualized 7.1% as the Participation Rate narrowed to 65.8% form 65.9%. A deeper look at the report showed a 2.4K contraction in full-time employment, while part-time positions increased another 0.4K following the 5.3K rise in March. Indeed, the recent weakness in the labor market may encourage the Bank of Canada (BoC) to retain a cautious outlook for the real economy, but we may see Governor Stephen Poloz and Co. gradually move away from its easing cycle following the ‘insurance’ rate-cuts in 2015. The Canadian dollar lost ground following the weaker-than-expected employment figures, with USD/CAD climbing above the 1.2900 handle to end the day at 1.2905.