The 1Q U.S. Gross Domestic Product (GDP) report may dampen the appeal of the greenback and spark a near-term advance in EUR/USD as signs of a slowing recovery weigh on interest-rate expectations.

A soft growth figure may encourage the Federal Reserve to retain its current policy throughout most of 2016 amid the ongoing 9 to 1 split within the central bank, but a marked rebound in the core Personal Consumption Expenditure (PCE), the Fed’s preferred gauge for inflation, may put increased pressure on Chair Janet Yellen and Co. to further normalize monetary policy over the coming months especially as the U.S. economy approaches ‘full-employment.’

Slowing business outputs along with the weakness in private-sector consumption may drag on the growth rate, and a dismal GDP report may produce headwinds for the dollar as market participants push out bets for the next Fed rate-hike.

Nevertheless, the pickup in housing accompanied by ongoing improvement in labor-market dynamics may help to boost economic activity, and a positive development may generate a bullish reaction in the U.S. dollar as it puts increased pressure on the Federal Reserve to further normalize monetary policy sooner rather than later. 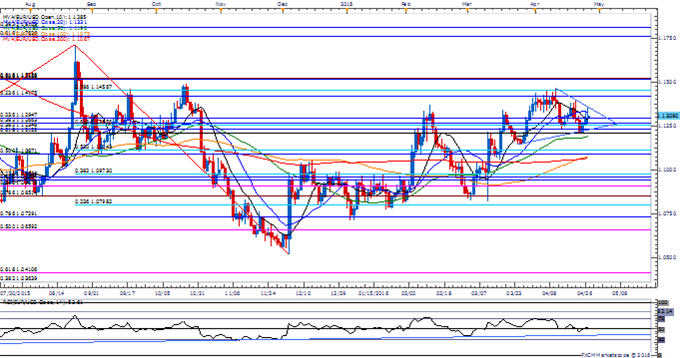 The advance Gross Domestic Product (GDP) report fell just shy of market expectations as the growth rate increased an annualized 0.7% in the fourth-quarter, while Personal Consumption increased 2.2% amid forecasts for a 1.8% print. At the same time, the core Personal Consumption Expenditure (PCE) came largely in-line with market projections as it narrowed to an annualized 1.2% from 1.4% during the last three-months of 2015. The better-than-expected reading for private-spending may put increased pressure on the Federal Open Market Committee (FOMC) to further normalize monetary policy over the coming months as the central bank looks for a ‘consumer-led’ recovery in 2016. Despite the mixed prints, the greenback extended the advance from the overnight session, with EUR/USD slipping below the 1.0850 region to end the day at 1.0828.