- U.K. Retail Sales to Contract for First Time Since December.

The U.K. Retail Sales report may produce headwinds for the British Pound and drag on GBP/USD as signs of a slowing recovery provides the Bank of England (BoE) with greater scope to further delay its normalization cycle.

Even though BoE argues that the next policy move will be to lift the benchmark interest rate off of the record-low, the Monetary Policy Committee (MPC) may preserve its current policy throughout 2016 in an effort to mitigate the downside risks surrounding the real economy.

The recent weakness in household sentiment accompanied by the slowdown in economic activity may drag on private-sector consumption, and a dismal sales report may spur a bearish reaction in GBP/USD as market participants push out bets for a BoE rate-hike.

Nevertheless, the expansion in private-sector lending paired with the ongoing improvement in labor-market dynamics may boost household spending, and a positive development may generate a near-term rebound in GBP/USD as it puts pressure on Governor Mark Carney and Co. to normalize monetary policy sooner rather than later. 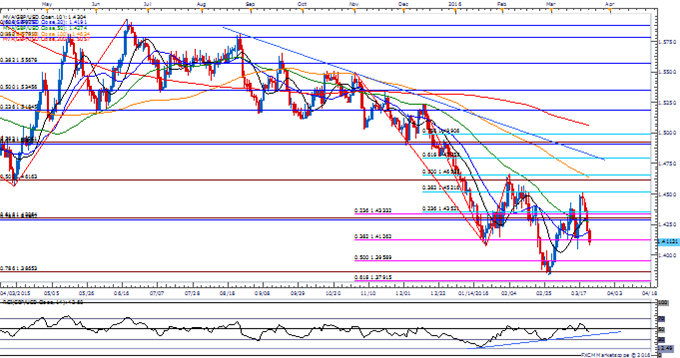 Impact that the U.K. Retail Sales Report has had on GBP during the last release

U.K. Retail Sales beat market expectations in January, with household spending increasing 2.3% after contracting a revised 1.3% in December. A deeper look at the report showed a meaningful rebound in discretionary spending, with sales at non-food stores increasing 3.6%, while spending on clothing & footwear advanced 3.3% during the same period. Despite the better-than-expected print, it seems as though the Bank of England (BoE) will stick to its current policy throughout the first-half of 2016 as the U.K. referendum clouds the economic outlook for the region. Nevertheless, there was a limited market reaction to the data print as GBP/USD dipped below the 1.4300 handle during the European trade, but the sterling regained its footing during the North American session to end the day at 1.4399.