According to a Bloomberg News survey, 28 of the 29 economists polled forecast the Reserve Bank of Australia (RBA) to keep the official cash rate on hold at 2.00%, but the policy statement may produce near-term headwinds for AUD/USD should the central bank show a greater willingness to further insulate the real economy.

Even though the RBA carries its wait-and-see approach into 2016, the ongoing easing cycle in the Asia/Pacific region may push Governor Glenn Stevens to adopt a more dovish outlook for monetary policy in an effort to encourage a stronger recovery.

Sticky price growth accompanied by the expansion in private-sector consumption may keep the RBA on the sidelines throughout 2016, and more of the same from Governor Stevens and Co. may fuel a larger rebound in AUD/USD as the central bank continues to defy market expectations.

However, the ongoing contraction on business outputs may prompt the RBA to take a more proactive approach in combating the ‘below-trend’ growth in Australia, and the aussie-dollar stands at risk of giving back the rebound from the previous month should the central bank look to implement lower borrowing-costs over the coming months. 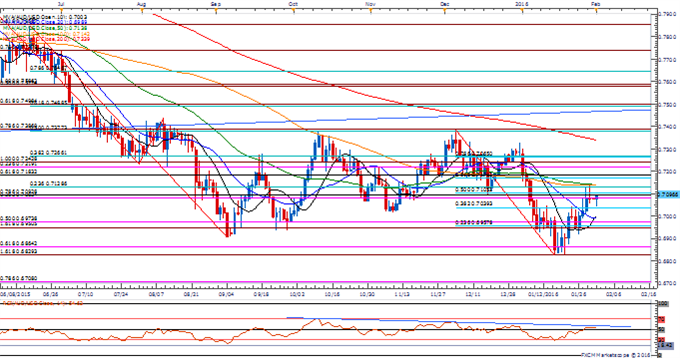 As expected, the Reserve Bank of Australia (RBA) retained the cash rate at 2.00%, but kept the door open to further embark on its easing cycle as the region continues to face ‘below-trend’ growth. Nevertheless, it seems as though Governor Glenn Stevens will largely endorse a wait-and-see approach in 2016 as the central bank head appears to be in no rush to further insulate the real economy. The Australian dollar gained ground following the rate decision, with AUD/USD bouncing off of the 0.7250 region to close the Asian/Pacific session at 0.7276.