A marked downward revision to the 3Q U.S. Gross Domestic Product (GDP) report may dampen the appeal of the greenback and spur a larger rebound in EUR/USD as fears of a slower recovery drag on interest rate expectations.

Even though the Federal Open Market Committee (FOMC) removes the zero-interest rate policy (ZIRP) in 2015 and remains confident in achieving the 2% inflation target over the policy horizon, the ongoing slack within the real economy may prompt the ‘data dependent’ central bank to endorse a wait-and-see approach in the first-half of 2016.

The slowdown in household consumption may generate a dismal GDP figure as it remains one of the leading drivers of growth, and fears of a slower recovery may spur a rift within the central bank as Chair Yellen appears to be in no rush to further normalize monetary policy.

However, the expansion in private-lending accompanied by the pickup in building activity may generate a stronger-than-expected growth report, and a positive development may trigger a near-term advance in the greenback as market participants boost bets for higher-costs in 2016. 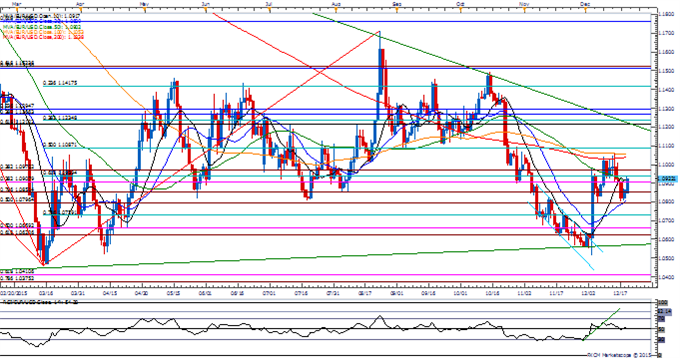 The final 2Q U.S. Gross Domestic Product (GDP) report showed an upward revision in the growth rate, with the economy expanding an annualized 3.9% amid an initial forecast for a 3.7% print. In addition, Personal Consumption and the core Personal Consumption Expenditure (PCE), the Fed’s preferred gauge for inflation, also exceeded market expectations and were revised up to 3.6% and 1.9%, respectively. Signs of a stronger recovery may encourage the Federal Reserve to adopt a more hawkish tone over the coming months as the economy approaches ‘full-employment,’ while Chair Janet Yellen anticipates the central bank to achieve its 2% inflation goal over the policy horizon. Despite the upward revision, there was a rather limited reaction to the data prints, with EUR/USD snapping back from the 1.1125 region to close the day at 1.1190.

DAX 30: The Euro, the Force Is Strong With This One