- Will USD Strength Become a Growing Concern for Fed Officials?

Despite the ongoing 9 to 1 split within the Federal Open Market Committee (FOMC), the policy meeting minutes may fuel speculation for a December liftoff and spur fresh monthly lows in EUR/USD should the central bank highlight an improved outlook for the world’s largest economy.

With the U.S. economy approaching ‘full-employment,’ the Fed may largely stay on course to remove the zero-interest rate policy (ZIRP) at the December 16 interest rate decision as Chair Janet Yellen remains confident in achieving the 2% inflation target over the policy horizon. On the other hand, increased concerns surrounding the slowdown in global growth may drag on interest rate expectations, and the dollar stands at risk of facing a near-term correction should the majority show a greater willingness to carry the current policy into 2016.

Sticky price growth accompanied by the ongoing improvement in the labor market may prompt the Fed to normalize monetary policy later this year, and the U.S. dollar may appreciate throughout the remainder of the month should the fresh batch of central bank rhetoric boost bets for a 2015 Fed rate-hike.

Nevertheless, the persistent slack in private-sector consumption paired with fears of a slower recovery may keep the Fed on the sidelines, and most committee members may opt to further insulate the real economy amid the external risks surrounding the region. 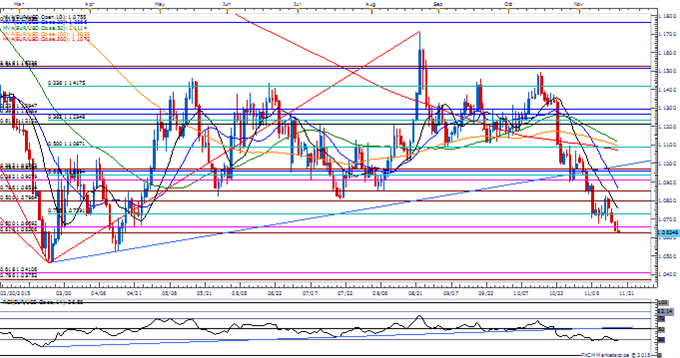 The Federal Open Market Committee (FOMC) meeting minutes suggests that the central bank remains largely on course to normalize monetary policy in 2015 as ‘many’ officials expect a liftoff later this year, but it seems as though that board remains in no rush to remove the zero-interest rate policy (ZIRP) amid the downside risks surrounding the economic outlook. Even though the Fed continues to prepare U.S. households and businesses for higher borrowing-costs, the central bank may carry its current policy into 2016 should the external risks surrounding the world’s largest economy drag on the outlook for growth and inflation. The initial bearish reaction in the greenback was short-lived, with EUR/USD snapping back from the 1.1300 handle to end the North American trade at 1.1274.

GBP/USD Technical Analysis: The Cable is All Wound Up for Inflation Data