According to a Bloomberg News survey, 17 of the 29 economists polled forecast the Reserve Bank of Australia (RBA) to keep the official cash rate on hold at 2.00%, but the fresh batch of central bank rhetoric may undermine the near-term rebound in AUD/USD should Governor Glenn Stevens show a greater willingness to further embark on the easing cycle.

Even though the RBA offers limited forward-guidance for monetary policy, Governor Stevens may continue to jawbone the local currency while stirring speculation for lower borrowing-costs as the central bank combats below-trend growth.

The RBA may take additional steps to further insulate the real economy amid slowing price growth paired with the renewed weakness in the labor market, and the Australian dollar stands at risk of facing near-term headwinds should the central bank highlight a more dovish outlook for monetary policy.

However, the RBA may largely endorse a wait-and-see approach as the previous rate cuts continue to work their way through the economy, and more of the same from Governor Stevens and Co. may foster a larger rebound in AUD/USD as it boosts interest rate expectations. 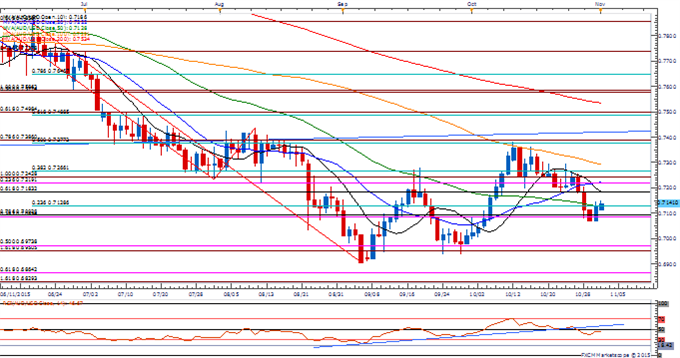 The Reserve Bank of Australia (RBA) kept the cash rate steady at 2.00%, with more of the same from Governor Glenn Stevens as the central bank head continues to see a ‘moderate’ recovery in the real economy. Despite the ongoing slack in private-sector activity, it seems as though the RBA will stick to the sidelines throughout 2015 as the central bank forecasts inflation ‘to remain consistent with the target over the next one to two years.’ The Australian dollar rallied following the neutral tone, with AUD/USD climbing above the 0.7100 handle to end the Asia/Pacific trade at 0.7116.