- Core Inflation to Hold Steady at Annualized 0.9% for Third-Consecutive Month.

The disinflationary environment in the euro-area may produce a further decline in EUR/USD as the European Central Bank (ECB) stands ready and willing to further embark on its easing cycle, but the stickiness in the core Consumer Price Index (CPI) may keep the Governing Council on the sidelines throughout 2015 as the non-standard measures work their way through the real economy.

Despite speculation for a major announcement at the ECB’s December 3 interest rate decision, signs of sticky price growth may encourage central bank President Mario Draghi to endorse a wait-and-see approach, and the Governing Council may merely look to buy more time as they continues to assess the outlook growth and inflation.

Waning demand from home and abroad accompanied by lower input costs may push European firms to offer discounted prices, and an unexpected slowdown in the headline & core rate of inflation may weigh on the Euro exchange rate as market participants boosts bets for additional monetary support.

However, improved confidence paired with the pickup in private-sector activity may foster sticky price growth in the euro-area, and a better-than-expected CPI report may heighten the appeal of the single-currency as it provides the ECB with greater scope to retain the current policy throughout the remainder of the year. 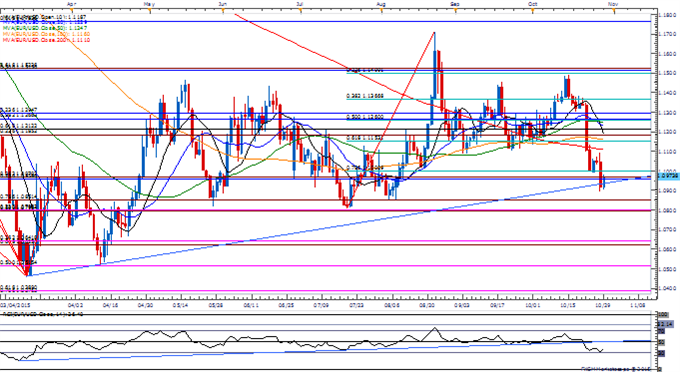 Driven by weak energy prices, the Euro-Zone’s Consumer Price Index (CPI) unexpectedly contracted for the first time since April, with price growth falling an annualized 0.1% in September, while the core rate of inflation remained steady at 0.9% for the second month. The disinflationary environment may put increased pressure on the European Central Bank (ECB) to further embark on its easing cycle especially as the board struggles to achieve its one and only mandate for price stability. The Euro tracked lower following the worse-than-expected print, with EUR/USD steadily losing ground throughout the North American session to end the day at 1.1175.