- Will Stronger GDP Spur Larger Dissent Within the Bank of England (BoE)?

The U.K.’s Gross Domestic Product (GDP) report may heighten the appeal of the sterling and spur a larger rebound in GBP/USD as the economy is expected to expand another annualized 2.4% in the third-quarter of 2015.

Even though the economy grows at the slowest pace in since 2013, data prints pointing to a more sustainable recovery may keep the Bank of England (BoE) on course to normalize monetary over the near to medium-term and generate a greater dissent within the central bank as the outlook for growth and inflation improves.

The pickup in private-sector consumption accompanied the rise in business outputs may offer a better-than-expected GDP print, and signs of a stronger recovery may encourage a bullish reaction in GBP/USD as it boosts interest rate expectations.

Nevertheless, waning demand from abroad paired with the slowdown in job growth may drag on the real economy, and a dismal report may push the BoE to further delay its normalization cycle in an effort to further mitigate the downside risks surrounding the region. 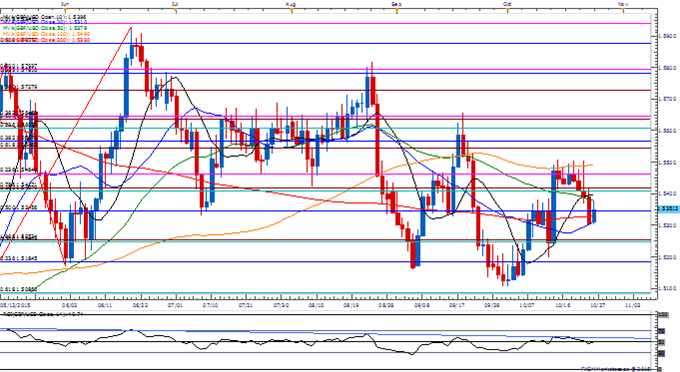 The 2Q U.K. Gross Domestic Product (GDP) report was largely in-line with market expectations as the growth rate increased an annualized 2.6%, with the economy expanding 0.7% on a quarterly basis. Signs of a steady recovery may encourage the Bank of England (BoE) on course to normalize monetary policy, and Governor Mark Carney may continue to prepare U.K. households and businesses for higher borrowing-costs as the central bank anticipates stronger inflation to emerge over the coming months. Sterling surged following the GDP report, with GBP/USD climbing above the 1.5550 region and closing the North-American session at 1.5611.