- Core Rate of Inflation to Uptick to Annualized 2.2% From 2.1%- Lowest Since February.

Despite forecasts for a slowdown in Canada’s Consumer Price Index (CPI), an uptick in the core rate of inflation may heighten the appeal of the loonie and spur a near-term decline in USD/CAD as it boosts interest rate expectations.

Even though the Bank of Canada (BoC) endorses a neutral outlook for monetary policy, a pickup in the core CPI may fuel concerns of overshooting the inflation target, and Governor Stephen Poloz may adopt a more hawkish tone over the coming months as the central bank sees the region emerging from the technical recession from earlier this year.

Signs of a stronger recovery accompanied by the expansion in private-sector may encourage sticky price growth, and a pickup in the core rate of inflation may spur greater demand for the loonie as the economic outlook improves.

However, Canadian firms may offer discounted prices amid the slowdown in foreign demand accompanied by the ongoing slack in the real economy, and a weaker-than-expected CPI print may reinforce a long-term bullish outlook for USD/CAD amid the deviating paths for monetary policy. 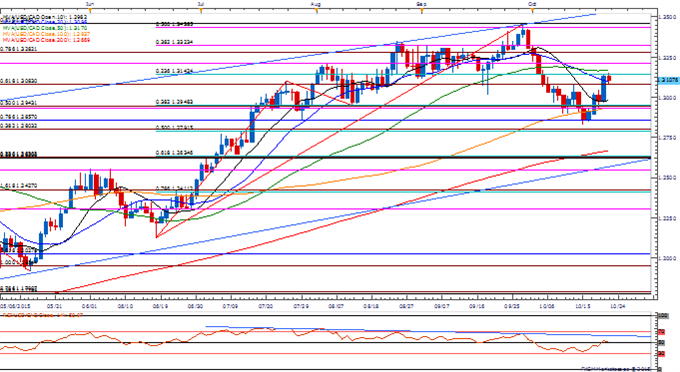 Canada’s Consumer Price Index (CPI) held steady at an annualized rate of 1.3%, while the core rate of inflation narrowed to 2.1% from 2.4% during the same period to mark the slowest pace of growth since February. Lower oil prices continued to drag on inflation, with Gasoline, Energy and Transportation costs contracting from the previous month, while prices for Clothing, Footwear climbed 1.1% during the same period, suggesting that Canadian firms are scaling back on discounting. Sticky price growth may encourage the Bank of Canada (BoC) to preserve its current policy throughout 2015, but Governor Stephen Poloz may retain a cautious outlook for the region as the economy faces a technical recession. Despite the in-line prints, the Canadian dollar struggled to hold its ground following the slowdown in core CPI, with USD/CAD climbing above the 1.3100 handle and closing the day at 1.3218.