A slowdown in the Euro-Zone’s Consumer Price Index (CPI) may drag on the Euro and spark a short-term decline in EUR/USD as it puts increased pressure on the European Central Bank (ECB) to further embark on its easing cycle.

Even though the ECB keeps the door open to expand the scope as well as the duration of its quantitative easing (QE) program, stickiness in the core rate of inflation may encourage the Governing Council to endorse a wait-and-see approach at the October 22 as central bank President Mario Draghi anticipates price growth to pick up towards the end of the year.

Lower input costs paired with the ongoing slack in private-sector consumption may encourage European firms to offer discounted prices, and a dismal CPI print may spur a bearish reaction in the Euro as it fuels speculation for additional monetary support.

Scalping EURUSD Ahead of NFP- Long Bias Favored Above 1.12 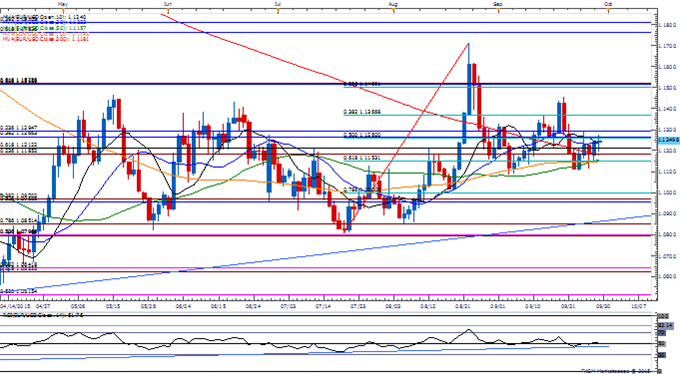 The Euro-Zone’s Consumer Price Index (CPI) beat market expectations as the headline reading increased another 0.2% in August, while the core rate of inflation grew 1.0% amid forecasts for a 0.9% clip. Despite the better-than-expected prints, the European Central Bank (ECB) may have little choice but to further embark on its cycle as the resilience in the Euro exchange rate accompanied by weaker energy prices undermines the central bank’s scope to achieve its one and only mandate for price stability. Nevertheless, the market reaction was largely limited, with EUR/USD edging below the 1.1200 handle following the release, but the pair consolidated throughout the North American trade to end the day at 1.1208.