- U.S. GDP to Rebound Annualized 2.5% After Contracting During First Three-Months of 2015.

The advance 2Q U.S. Gross Domestic Product (GDP) report may boost the appeal of the greenback and spark a further decline in EUR/USD as signs of a stronger recovery fuels expectations for a 2015 Fed rate hike.

Despite the unanimous vote to retain the current policy in July, a marked rebound in the growth rate may put increased pressure on the Federal Reserve to remove the zero-interest rate policy (ZIRP) sooner rather than later as the committee remains confident in achieving the 2% target for inflation over the policy horizon.

Increased production paired with the pickup in building activity may encourage a strong GDP print, and a faster rate of growth may heighten the bullish sentiment surrounding the greenback as it boosts interest rate expectations.

Nevertheless, waning confidence along with the ongoing slack in private-sector consumption may drag on the growth rate, and fears of a slower recovery may prompt the FOMC to further delay its normalization cycle in an effort to stem the downside risks surrounding the U.S. economy. 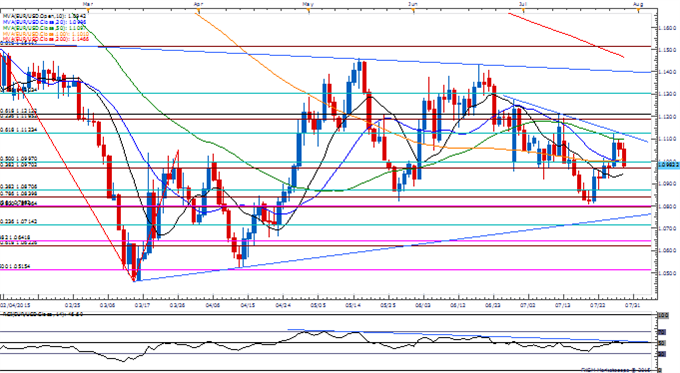 NZDUSD Breakout or Fake-Out? Key Levels to Know Ahead of FOMC, US GDP

The U.S. economy barely grew in the first-quarter of 2015 as the growth rate climbed an annualized 0.2% after expanding 2.2% in the three-months through December. Meanwhile, Personal Consumption increased 1.9% versus expectations for a 1.7% clip, while the core Personal Consumption Expenditure (PCE) slowed to an annualized 0.9% from 1.1% in the fourth-quarter. With seasonal/transitory factors largely weighing on economic activity, it seems as though the Federal Reserve will stay on course to raise the benchmark interest rate later this year as the central bank anticipates a stronger recovery in the months ahead. The greenback lost ground following the weak GDP print, with EUR/USD pushing above the 1.1110 handle to end the North American session at 1.1127.