Another 0.4% expansion in U.K. Retail Sales may heighten the appeal of the British Pound and prompt a near-term breakout in GBP/USD as it puts increased pressure on the Bank of England (BoE) to normalize monetary policy sooner rather than later.

The more hawkish BoE Minutes suggest that the central bank remains on course to raise the benchmark interest rate off of the record-low, and signs of a stronger U.K. recovery may spur a larger dissent within the Monetary Policy Committee (MPC) as a growing number of BoE officials see a greater risk for inflation.

Discounted prices along with the pickup in household confidence may generate a strong retail sales report, and a faster rate of private-consumption may boost interest rate expectations as the U.K. economy gets on a firmer footing.

However, easing private-sector credit paired with slower job growth may drag on spending, and a dismal sales print may spur a further consolidation in the exchange rate as it raises the BoE’s scope to retain its current policy stance for an extended period. 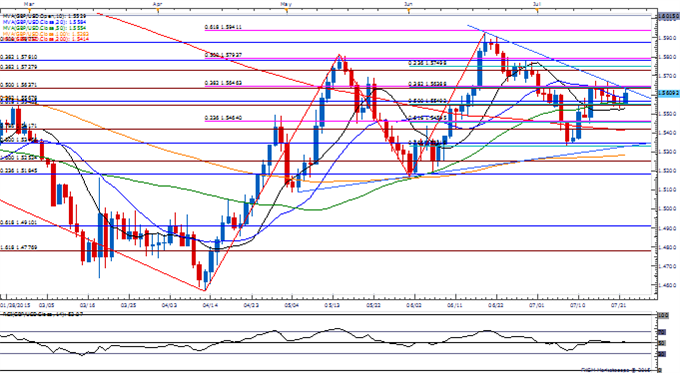 U.K. Retail Sales unexpectedly increased another 0.2% in May following a revised 0.8% expansion the month prior. The pickup was largely driven by increased demand for Household Goods, while consumers scaled back discretionary spending on Clothing and Footwear. Even though the Bank of England (BoE) largely endorses a wait-and-see approach, signs of a stronger U.K. recovery may put increased pressure on the central bank to normalize policy sooner rather than later as Governor Mark Carney remains confident in achieving the 2% inflation target over the policy horizon. The initial market reaction was short-lived, with GBP/USD struggling to hold above the 1.5900 handle, with the pair consolidating throughout the North American session to end the day at 1.5873.