A further slowdown in the U.K. Consumer Price Index (CPI) may generate a near-term pullback in GBP/USD as it puts increased pressure on the Bank of England (BoE) to retain its current policy throughout 2015.

However, the stickiness in the core rate of inflation may limit the downside risk for the sterling as BoE Governor Mark Carney anticipates faster price growth in the second-half of the year, and the central bank head may continue to prepare U.K. households and businesses for higher borrowing-costs should the fundamental developments show signs of a stronger recovery.

Lower input costs paired with the slowdown in private-sector credit may encourage U.K. firms to offer discounted prices, and a weak CPI figure may dampen the appeal of the British Pound as it drags on interest rate expectations.

Nevertheless, improved confidence along with resilience in household consumption may prompt a strong inflation print, and a positive development may pave the way for a near-term advance in GBP/USD as the BoE remains on course to normalize monetary policy. 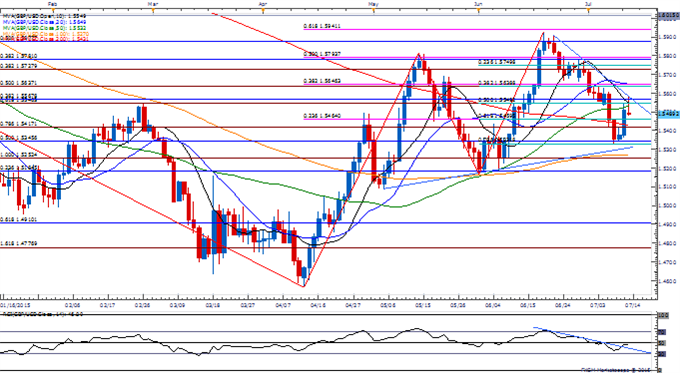 The U.K. Consumer Price Index (CPI) climbed an annualized 0.1% in May after contracting for the first time since 1960, while the core rate of inflation climbed to 0.9% from 0.8% the month prior to mark the first advance since January. Even though the Bank of England (BoE) remains on course to normalize monetary policy, subdued price growth may encourage the central bank to retain its wait-and-see approach throughout 2015, and the British Pound may face further headwinds over the near to medium-term as the committee remains unanimous in preserving its current policy stance. GBP/USD slipped below the 1.5500 following the mixed CPI print, but the pound-dollar regained its footing during the North American trade to end the day at 1.5646.