- Will ECB President Mario Draghi Speak Out Against the ‘Taper Tantrum?’

The fresh batch of rhetoric coming out of the European Central Bank (ECB) may heighten the bearish sentiment surrounding the EUR/USD should President Mario Draghi endorse a dovish outlook for monetary policy and stick to the EUR60B asset-purchase program.

Why Is This Event Important:However, we may see growing speculation for a ‘taper tantrum’ in the euro-area should Mr. Draghi adopt a more upbeat tone for the region and talk down expectations for more non-standard measures as the recent developments coming out of the monetary union beat market forecasts.

The Governing Council may keep the door open to further embark on its easing cycle amid slowing price growth paired with the ongoing contraction in private-sector lending, and a greater willingness to implement more non-standard measures may generate fresh-lows in EUR/USD amid the deviation in the policy outlook.

Nevertheless, we may get more of the same from the ECB amid the series of positive data prints coming out of the euro-area, and the single-currency may face a more meaningful correction over the near-term should the central bank implement a more hawkish twist to the forward-guidance for monetary policy. 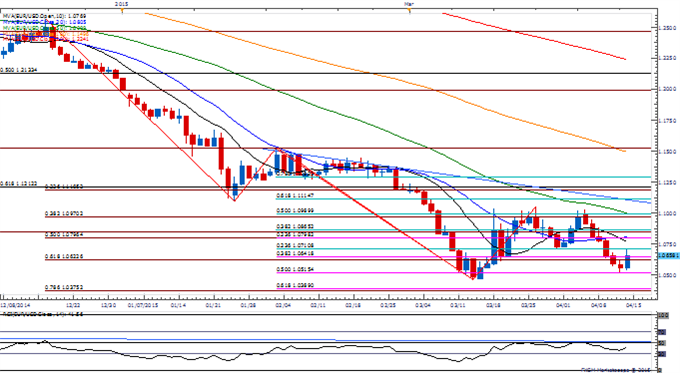 The European Central Bank (ECB) retained the benchmark rate at the record-low of 0.05%, while President Mario Draghi announced a EUR 60B/month quantitative easing (QE) program, which would include purchases of sovereign bonds, as well as asset-backed securities and covered bonds to achieve a EUR 1T expansion in the balance sheet. At the same time, ECB also raises its growth and inflation forecasts through 2017 as the central bank anticipates the non-standard measures along with a lower exchange rate to spur a stronger recovery in the euro-area. Despite the initial uptick in EUR/USD, the single currency struggled to hold its ground following the QE announcement, with the pair slipping below the 1.1050 region to close the day at 1.1024.