Another 0.2% expansion in the Euro-Zone’s Gross Domestic Product (GDP) may encourage the European Central Bank (ECB) to drop is dovish tone for monetary policy as the Governing Council anticipates its non-standard measures to boost economic activity.

Why Is This Event Important:However, the ECB may have little choice but to further support the monetary union and introduce additional policy tools in 2015 as the governments operating under the single currency struggle to implement the structural changes to rebalance the economy.

Improved confidence paired with greater demand from home and abroad may generate a better-than-expected GDP print, and a pickup in economic activity may encourage a more meaningful rebound in EUR/USD as it raises the ECB’s scope to retain its current policy throughout 2015.

Nevertheless, the ongoing slack across the euro-area may undermine expectations for more meaningful recovery, and the Governing Council may continue to endorse a dovish tone for monetary policy as it struggles to achieve its one and only mandate for price stability. 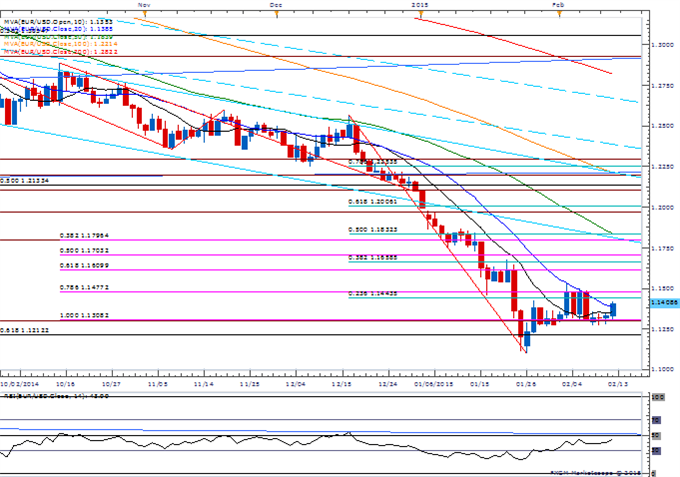 The Euro-area economy grew a modest 0.2% in the third quarter of 2014, following a revised 0.1% expansion during the three-months through June. Despite the better-than-expected print, the European Central Bank (ECB) may come under pressure to further embark on its easing cycle and introduce a quantitative easing (QE) program as it struggles to achieve the 2% target for inflation. Beyond the limited market reaction, EUR/USD drifted towards the 1.2400 handle going into the North American trade, but the weakness was short-lived as the pair recovered to close at 1.2501.