It’s been a volatile few days for global financial markets. After the G7 summit, the Federal Reserve’s Jackson Hole Economic Policy Symposium, and the flurry of comments from US President Donald Trump, traders are repricing expectations around the Fed’s interest rate cut cycle. In turn, the US Dollar (via the DXY Index) has swung wildly in recent days. There’s scope for both resolution and a deepening of the US-China trade war all at the same time.

Where does this leave us in the trade war news cycle? As we’ve previously noted, the cycle goes: (1) Trump administration is tough on China; (2) financial markets sell off on trade war concerns; (3) Trump administration hints at US-China trade deal; (4) financial markets rally on trade deal hopes; (5) No deal materializes. Now that US President Trump has indicated he is having “second thoughts” on escalating the trade war further, it appears that we’ve just moved from stage 3 to stage 4. 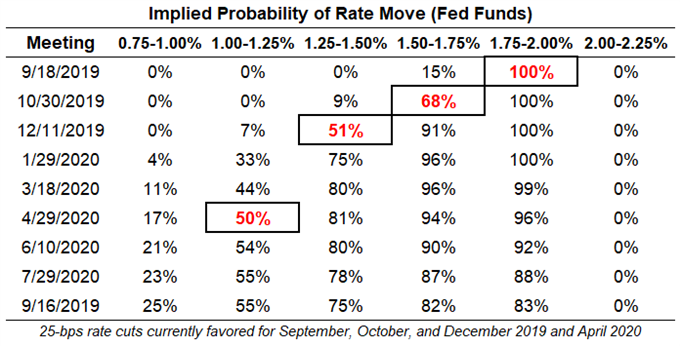 After the G7 summit in France, the Fed’s Economic Policy Symposium in Jackson Hole, and the latest developments in the US-China trade war, rates markets have become a bit more dovish relative to where they were on Thursday, August 22. Fed funds futures are now pricing in a 15% chance of a 50-bps interest rate cut in September (up from 2%). Similarly, markets are pricing in a 91% chance of a third and final 25-bps rate cut in December (up from 87%).

Still No End in Sight for US-China Trade War 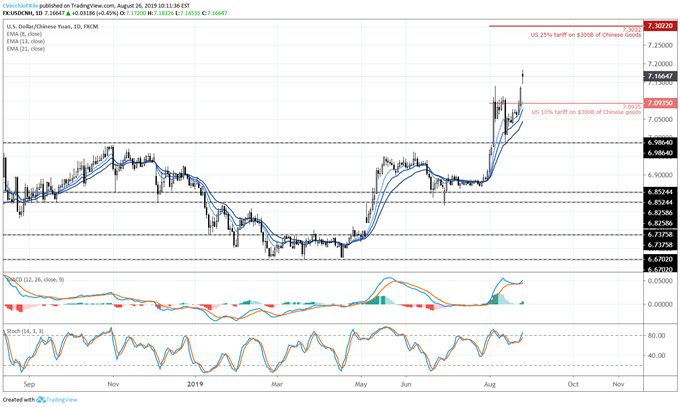 It’s easy to lose the ‘signal’ with all of the ‘noise’ in financial markets right now. While it may be prudent to watch for tweets from the US president, it may be more effective, long-term, to monitor where Chinese officials allow the USDCNH exchange rate to settle every day. USDCNH’s gap open higher after the weekend’s developments suggest that the US-China trade war is getting worse. Until USDCNH reverses back towards 7.0000, there is little reason to think that the US-China trade war is on a path to resolution.

Following the mixed US durable goods orders report for July, the US economic calendar is back in focus as a veritable source of risk in the days ahead – but traders will need to wait until the second half of the week. On Thursday, US trade figures for July will show that the US has its largest trade deficit ever, another development surely to displease US President Donald Trump and his administration's trade representatives.

Also, on Thursday, Q2’19 US GDP figures will come into focus. Even as financial markets price in greater odds of a US recession per the US Treasury yield curve, US economic data simply hasn’t been that bad: Q3’19 US GDP estimates are holding in the low 2% range as well. 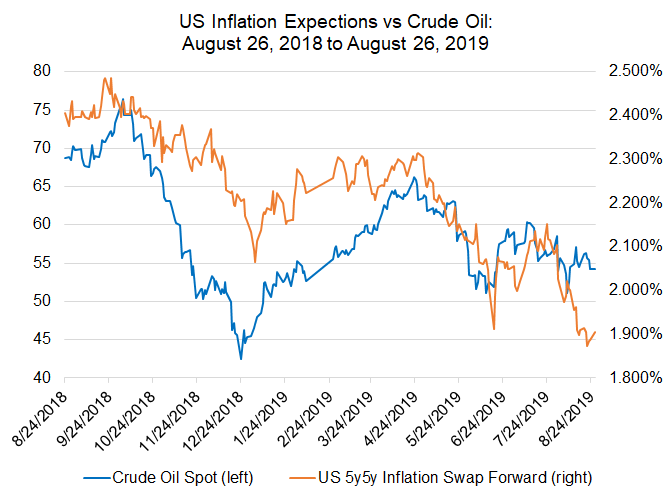 As crude oil prices – a proxy for growth given demand for energy – have struggled in recent weeks, US 5y5y inflation swap forwards have plummeted to fresh yearly lows. An environment marked by low inflation expectations is one in which the Fed should keep rates pointed lower for the foreseeable future – even if there is a breakthrough deal in the US-China trade war. 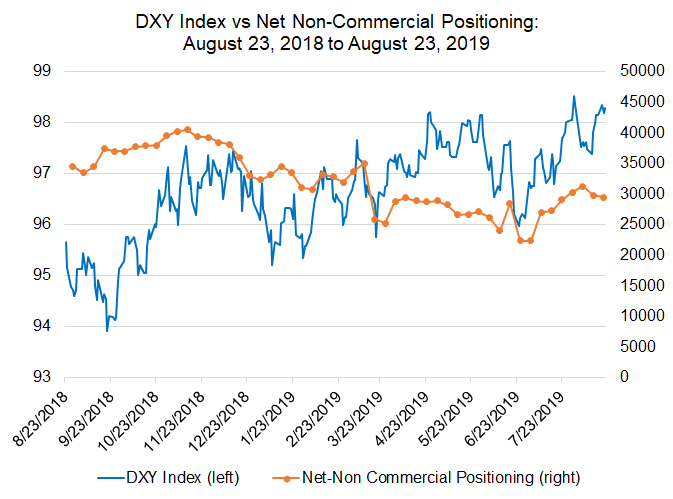 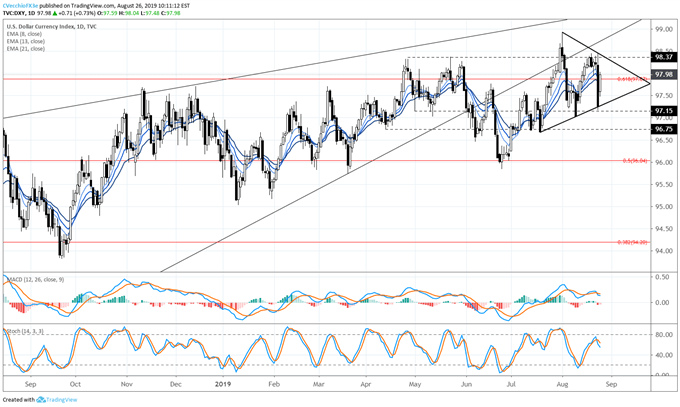 Despite the bearish outside engulfing bar marking the worst day of the year for the US Dollar (via the DXY Index) on Friday, August 23, prices remain within the symmetrical triangle that has been forming over the past five weeks. Price is intertwined in its daily 8-, 13-, and 21-EMA envelope, and both daily MACD and Slow Stochastics continue to point lower (albeit in bullish territory). To say that the US Dollar is volatile and without direction is an obvious observation.

The big picture for the US Dollar (via the DXY Index) has not changed: the outlook remains perilous if the recent recovery fails. The DXY Index is again looking at a retest of the rising trendline from the February 2018, March 2018, and March 2019 low lows – the backbone of the entire bull move. Failure to retake the uptrend would suggest that the major topping potential for the US Dollar remains valid.