Global financial markets are proving volatile in the wake of the monumental June Fed meeting. With the FOMC outlining a path forward where it’s possible for multiple interest rate cuts by the end of 2019, the combined drop in US Treasury yields and the US Dollar has created an environment that’s extremely friendly to higher yield, high beta assets. But for crude oil prices, the environment has been bolstered by none other than US President Donald Trump himself.

Crude Oil Prices Rally after Iran Shoots Down US Drone

Earlier today, Iran shot down a US drone either over international waters or Iranian sovereign territory. While both sides squabble over who is at fault, the fake of the matter is that this is another chapter in the rising geopolitical tensions between the US and Iran. The Strait of Hormuz, controlled by Iran, sees somewhere between 30-40% of the global oil supply pass through it every day. US President Donald Trump was quick to tweet that Iran “made a very bad mistake,” threatening that “you will find out” when asked about retaliation.

Accordingly, the repeated threats by Iran to cutoff access to this crucial global shipping lane may be helping undergird the rebound in price action as traders foresee a greater likelihood that supply concerns may abruptly materialize – particularly if the odds of US military action against Iran are increasing.

Against the backdrop where the OPEC+ production supply cuts may not be extended past the end of the month, the recent US-Iran tensions serve to neutralize an otherwise recently bearish fundamental environment for crude oil prices. 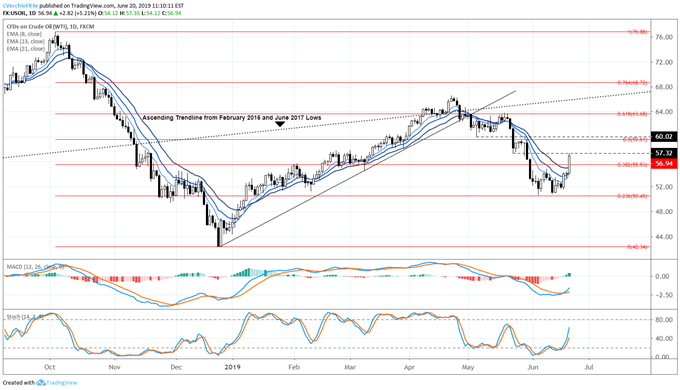 On Tuesday, ahead of the June Fed meeting, it was noted that “for the first time since May 22, crude oil prices are on the cusp of closing above the daily 8-EMA, with the daily candle forming a bullish key reversal. The bullish key reversal (a bullish outside engulfing bar at the low in a downtrend) forming today coupled with a break above the daily 8-EMA suggests the month-long selloff for crude oil prices may be coming to an end.” 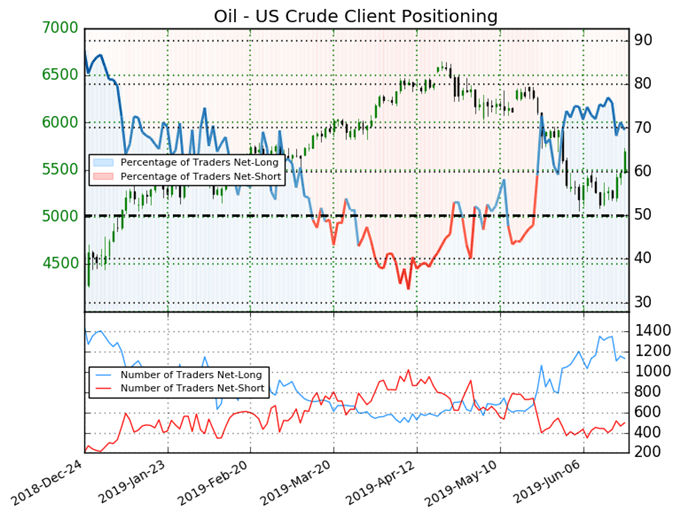 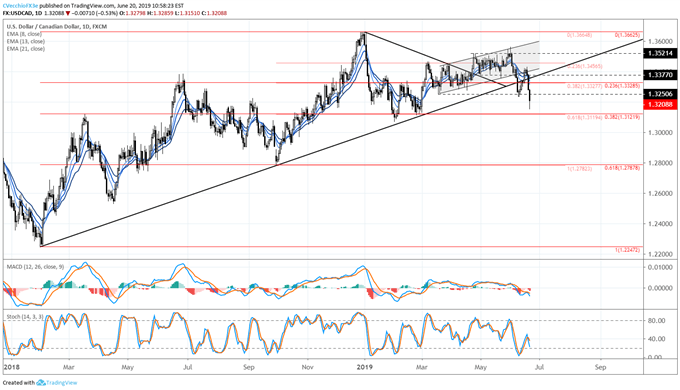 In the oil prices and USDCAD forecast prior to the June Fed meeting, we suggested that “now that crude oil prices are looking to turn higher, USDCAD may be getting ready to turn lower: USDCAD prices are currently forming a bearish key reversal (a bearish outside engulfing bar at the high in an uptrend) on the daily chart. Canadian Dollar strength may be coming over the next several sessions.”

Since Tuesday, USDCAD has made significant downward progress, falling out of the sideways range dating back to the end of April, the parallel rising channel in place since the beginning of March, and above all else, back below the rising trendline from the February 2018, September 2018, and March 2019 swing lows.

The path of least resistance is lower for USDCAD at the moment. Price is deepening its move below the daily 8-, 13-, and 21-EMA envelope, which is now in bearish sequential order. Similarly, both daily MACD and Slow Stochastics have issued ‘sell signals’ in bearish territory. As a result, USDCAD may now be targeting the area around 1.3120, where the 61.8% retracement of the Q4’18 high/low range and the 38.2% retracement of the 2018 high/low range converge. 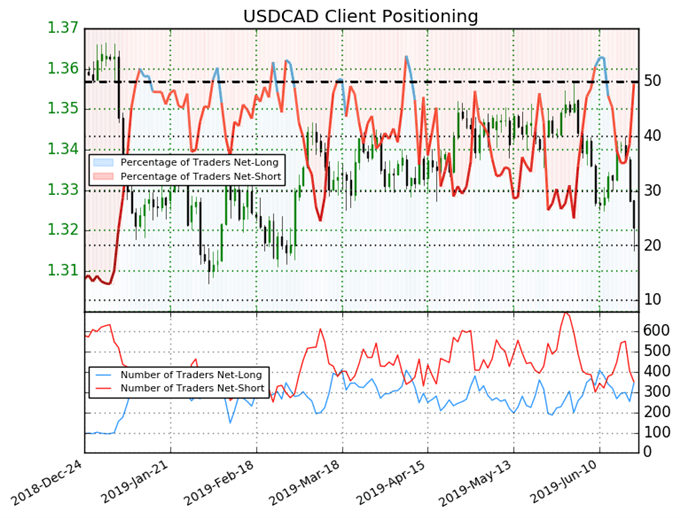