- USDCNH has rallied by over 0.74% so far on Monday, its best day since July 26, 2018; Chinese Yuan weakness is seen as a way for Chinese policymakers to hedge against the Trump tariffs.

- Spikes in short-term implied volatility measures have hurt higher yielding currencies and high beta assets, pointing to opportunities in various JPY-crosses in the days ahead.

- Retail traders are buying US Dollar weakness, perhaps confirming that the recent breakout attempt is indeed a failure.

The US Dollar (via the DXY Index) is attempting to ward off sellers following the bearish outside engulfing bar that formed following the April US Nonfarm Payrolls report on Friday. With global financial markets rocked by a series of tweets over the weekend from US President Donald Trump regarding the US-China trade war talks, higher yielding currencies and high beta assets have taken a hit at the start of the week.

In turn, demand for liquidity is boosting demand for safe havens like the Japanese Yen and US Dollar, helping the latter avoid following through to the downside after the DXY Index’s soft close at the end of last week.

US President Trumps’ double-talk in recent days has led to a confused market reaction on Monday morning. It was just last week that the US president spoke in optimistic tones that “we’re getting close to a very historic, monumental deal.” But he also said that “if it doesn’t happen, we’ll be fine too. Maybe even better.”

It now seems that US President Trump is going with the “it doesn’t happen” option after a series of tweets over the weekend, saying, “For 10 months, China has been paying Tariffs to the USA of 25% on 50 Billion Dollars of High Tech, and 10% on 200 Billion Dollars of other goods.”

But that may not be the extent of the new steps taken by the Trump administration. “The 10% will go up to 25% on Friday…325 Billions Dollars [sic] of additional goods sent to us by China remain untaxed, but will be shortly, at a rate of 25%.” All of the sudden, the ‘wall of worry’ that investors were climbing has seemingly been legitimized into an actual threat; or is this another bluff by US President Trump?

In the US Dollar weekly trading forecast, we noted that “traders may want to keep on eye on USDCNH prices as a litmus test in the near-future.” This holds truer now than ever before: Chinese officials have used Yuan devaluation to hedge the impact of the Trump tariffs, so it’s not a far cry to conclude that Chinese Yuan weakness (USDCNH strength) is a sign that the trade talks are nearing a negative resolution.

Read our notes from July 2018, US-China Trade War Enters New Phase amid Yuan Depreciation and August 2018, USDCNH Appreciation Not a Problem for China, Reserves Figures Show for more explanation on how Chinese officials use the Yuan to fight the Trump tariffs. 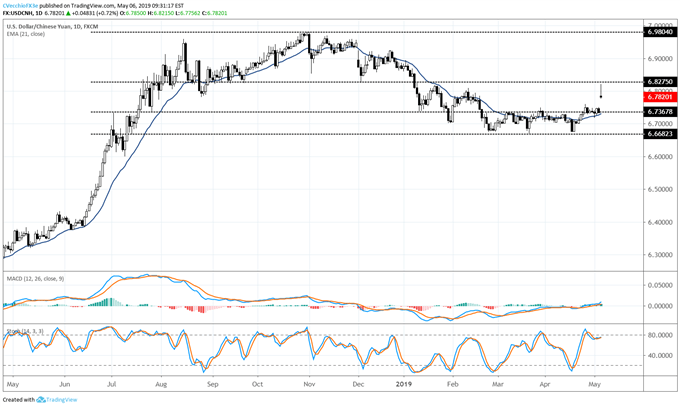 USDCNH prices are now comfortably above said level at 6.7820, which is a clear sign that the trade talks have soured. Only if USDCNH prices get back below 6.7368 would we say that the US-China trade talks are moving back in a positive direction. 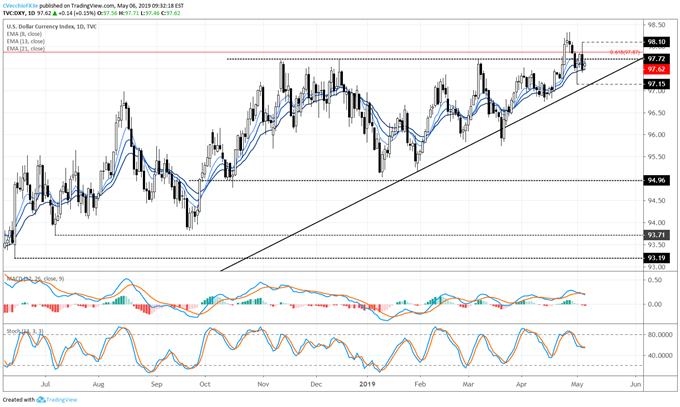 The DXY Index failed to close above 97.72 last week, range resistance going back to November 2018. Failure to do so may conjure feelings of a false breakout attempt, particularly as the Friday close saw a bearish outside engulfing bar cap the week.

At this point in time, given the big reversals seen last week around the May Fed meeting and the April US NFP report, it appears that the DXY Index has carved out a near-term range: above 98.10, and a bullish breakout condition may emerge; below 97.15, and a bearish breakdown could gather pace. The first few days this week may give traders some room to reassess their near-term outlooks.