- The DXY Index is down for a fourth day as the European currencies continue to make up ground as hopes to avoid to a “hard Brexit” scenario are building.

- Falling US Treasury yields may be helping prop up Gold prices, which have stabilized in recent days; Gold may retake the daily 21-EMA today for the first time since February 28.

The US Dollar (via the DXY Index) is experiencing its fourth day of losses as the European currencies continue to make up ground as hopes to avoid to a no deal, “hard Brexit” scenario are building. Gains by equity markets are helping quell the Japanese Yen, which may otherwise be having a better day given the downdraft in US Treasury yields (breaking out of a multi-week triangle to the downside) and the uptick in Gold prices.

Risk appetite has been buoyed not just by the latest Brexit developments but by progress in the US-China trade war negotiations as well. US Trade Representative Robert Lighthizer has said that major issues still remain, but that “we are in the final weeks of having an agreement.” Markets have seemed to glob on to that particular piece of commentary, ignoring the foreboding tone otherwise: “There still are major, major issues that have to be resolvedand if those issues are not resolved in a way that’s beneficial to the United States, we will not have an agreement.”

Where does this leave us in the trade war news cycle? As we’ve previously noted, the cycle goes: (1) Trump administration is tough on China; (2) financial markets sell off on trade war concerns; (3) Trump administration hints at US-China trade deal; (4) financial markets rally on trade deal hopes; (5) No deal materializes. So it would appear that we’re now experiencing phase 4 – the rally after hope for a deal. Don’t be surprised if the next few days produce some news that a trade deal is unlikely, before hope springs anew next week (so it goes).

Brexit Latest – Another Vote in Parliament

Yesterday’s defeat of UK Prime Minister Theresa May’s Brexit deal wasn’t much of a surprise; after all, the parameters of the deal didn’t change since she suffered the historic 230 vote loss back in January. If anything, the tighter margin of 149 votes signals that, while unhappy with May’s deal, some MPs are more put-off by the idea of a no deal, “hard Brexit.” That means that the parliamentary vote scheduled for this evening London time – the question being “should the UK leave with no deal?” – has good chances of failing as well.

Part of me can’t help but recall May’s commentary about not wanting to endure a significant extension, saying it should be only “a matter of months” if one were granted. To this end, a request for an extension to the negotiating window seems likely. It’s possible, given May’s failure to whip together a coalition to support her plan, that she abdicates her role as prime minister and calls for another General Election. 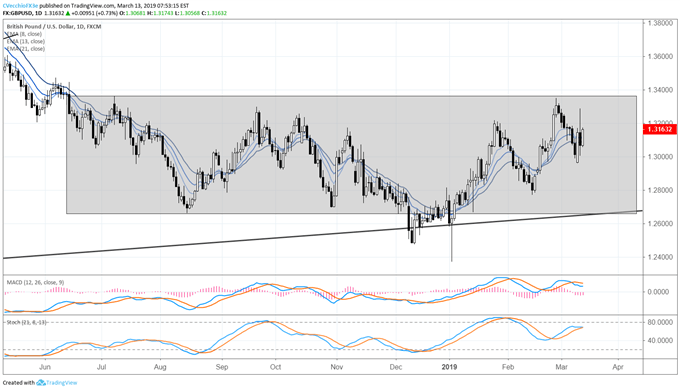 The concentration in news flow around the Brexit negotiations has contributed to a shift higher in volatility expectations for GBPUSD. Yet more significant price movements don’t necessarily translate into directional moves, as we’ve seen over the past several months. Indeed, since the bearish outside engulfing bar on June 14, 2018, GBPUSD has spent all but 16 days trading between 1.2660 and 1.3365 – that’s nearly 92% of the past nine-months within the range. So, for all the apocalyptic Brexit talk…GBPUSD doesn’t have much to show for it (not yet, anyway). 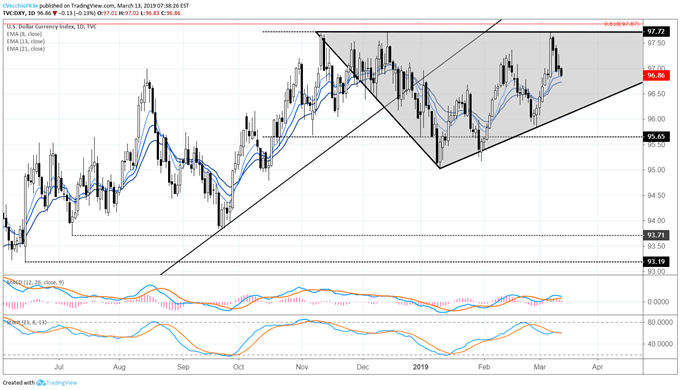 The broader gauge of the US Dollar has made little movement in recent months, today trading at levels seen back in February, January, December, November, and October. It’s possible that price action since mid-November has been coalescing into an ascending triangle against the 97.72 high set in November, December, and retested last week. While this may give a longer-term bullish bias in context of the consolidation developing after an uptrend, right now, the DXY Index’s forecast is necessarily neutral. Four consecutive days of losses has skewed the technical backdrop, with the both daily MACD and Slow Stochastics starting to point lower (albeit in bullish territory). Concurrently, with price enmeshed in the daily 8-, 13-, and 21-EMA envelope, patience is required before the next directional move becomes clear.