- The EUR/USD reversal during the ECB press conference is producing a bullish hammer on the daily chart, in turn helping DXY Index form a bearish shooting star.

- US Secretary of Commerce Wilbur Ross said that China and the US are “miles and miles” apart on trade negotiations and doesn’t expect a deal to come together next week.

- Retail traders have been quick to trim both Euro and US Dollar positioning during the reversals post-ECB today.

The US Dollar (via the DXY Index) is still trading to the topside on Thursday, although not after suffering significant losses over the past few hours. Despite hitting a fresh weekly high earlier this morning, the broad gauge of the US Dollar is now working on a bearish shooting star daily candlestick following a bounce-back performance by its largest component, the Euro. Accounting for 57.6% of the DXY Index, Euro strength following the European Central Bank rate decision and press conference now has the US Dollar on its back foot during the final 31-hours of the trading week.

For a full summary of the ECB rate decision, you should read my colleague Martin Essex’ piece, “EUR/USD Price Falls Then Rallies as ECB’s Draghi Highlights Downside Risks.” There are some particular notes that I think are worth underscoring here and now. Notably, there seems to be a sincere desire for the current Governing Council to declare some sort of ‘victory’ before ECB President Mario Draghi’s term ends in October 2019.

As such, despite Draghi & co commenting on the deteriorating state of the Eurozone – “risks have moved to the downside” – this was the first meeting under Draghi's tenure where the ECB has shifted its language around its economic assessment at a meeting without updated economic projections. However, Draghi also said that they need to see the monetary case for another round of stimulus like a TLTRO.

Putting the pieces together, it seems that the Governing Council’s desire to start normalizing policy runs affront to their assessment that the Eurozone economy is weakening, and this cognitive dissonance means that policy won’t be changed for the foreseeable future.

Masked by the ECB press conference were comments by US Secretary of Commerce Wilbur Ross, who said that China and the US were “miles and miles” away from an agreement and doesn’t expect a deal to come together next week. At this point, it seems like we’ve restarted the trade war news cycle: (1) Trump administration is tough on China; (2) financial markets sell off on trade war concerns; (3) Trump administration hints at US-China trade deal; (4) financial markets rally on trade deal hopes; (5) No deal materializes. In this case, US Secretary of Commerce Ross’ comments fit in with (5); don’t be surprised if rhetoric from the Trump administration heats up again.

It’s day 34 of the US government shutdown, and the winds are starting to shift – slowly. After a tit-for-tat over the State of the Union Address, US President Donald Trump has backed down to Democratic Speaker of the House Nancy Pelosi. While a good deal of media is focused on President Trump uncharacteristically folding, it should be noted that this is an instance in which pragmatism reigned over personality. To this end, perhaps this is a tealeaf for the shutdown. The Washington Post is reporting that “Trump pointed out that shutting down the government costs more than building the wall,” so perhaps a change of heart is around the corner. Otherwise, the cost of the shutdown will undoubtedly show up in the data soon: jobless claims are at 50-year lows and haven’t reflected government workers seeking relief. 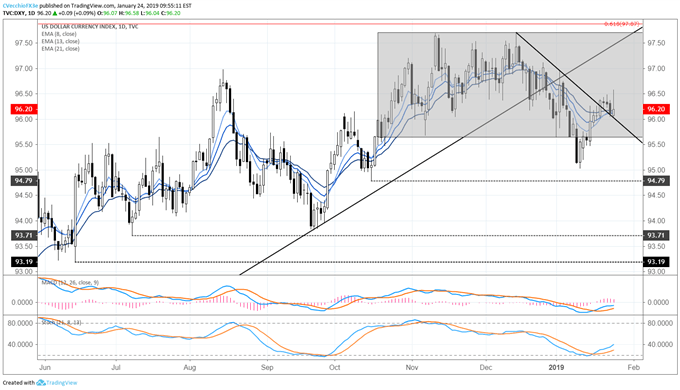 The DXY Index’s breakout attempt from the December 14 and January 3 highs is proving difficult, with price retracing the entire move from its weekly high earlier today. The bearish shooting star candlestick points to more losses in the near-term, although the close today will be incredibly important. Even though both daily MACD and Slow Stochastics are still pointed higher, they’ve yet to move past their respective median or neutral lines. Now that price is once again enmeshed in the daily 8-, 13-, and 21-EMA envelope (no clear separation), traders may be inclined to take a ‘neutral’ outlook on the US Dollar for the remainder of the week.