The US Dollar (via the DXY Index) has returned back to the topside on Tuesday amid a downdraft of weakness in the European currencies. The Euro, hit by concerns that it’s largest economy is inching towards a recession, is the big mover on the day. The German economy posted its weakest rate of growth in five years in 2018, underscoring what has been a steady erosion in the fundamentals supporting the Euro in recent weeks.

As the largest component of the DXY Index at 57.6%, any potential breakdown of the US Dollar gauge needs Euro participation – otherwise, follow-through won’t occur. This week, the only significant Eurozone economic data release is the December CPI report to be released on Thursday, due to show more signs of disinflation. Ultimately, the combination of weaker than expected growth from Germany plus slowing price pressures could pave the way for a dovish European Central Bank at its rate decision on January 24.

Attention is quickly shifting across the continent from Berlin to London where the British Pound is in the spotlight ahead of the UK parliament’s vote on UK PM Theresa May’s EU-UK Brexit deal later today. Whereas concerns over a failed vote in December 2018 triggered weakness in the British Pound, the past two weeks have seen rallies in the GBP-complex on the back of hope that the vote won’t pass. Rather, the projected failed vote may not be a sign that the UK is careening towards a no-deal ‘hard Brexit’ outcome, but rather that Brexit could potentially be avoided altogether.

Assuming UK PM May’s deal doesn’t pass today, then the next 24-hours for the British Pound could be rocky (even if options markets say otherwise; implied volatility is low). Depending upon the scale of the defeat, May could step down as prime minister. Or, if she doesn’t abdicate, the Labour party could call a ‘no confidence vote’ in an effort to trigger a general election. Would that mean Labour party leader Jeremy Corbyn is the next prime minister? Not necessarily: Labour trails the Tory party by 6% in the latest polls.

To this end, if by the end of the week May is still the UK’s prime minister, it’s equally possible that she is forced to go back to European Union officials in Brussels and try to renegotiate the deal once more. The fact of the matter is that politics will continue to be the prevailing factor for the British Pound for the foreseeable future – regardless of what happens today. 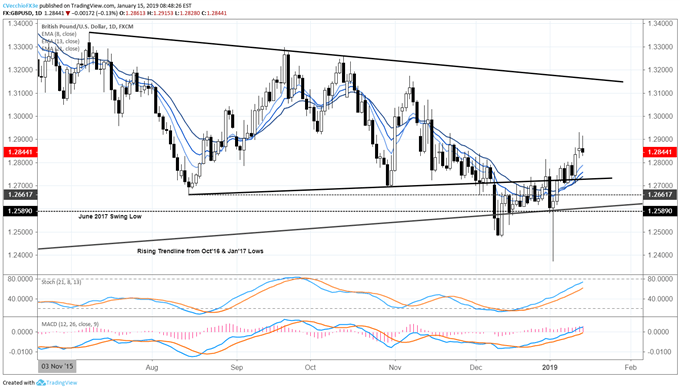 For GBP/USD, it’s been ‘Brexit or bust.’ Every big move over the past six-weeks has been directly tied to headlines around Brexit, and the resulting impact has been a technical structure that’s proved neither consistent nor reliable. In what now appears to be a false breakdown, GBP/USD has returned back into the symmetrical triangle that started in July 2018. Similarly, price is back above the August 2018 and June 2017 swing lows as well as the rising trendline from the October 2016 and January 2017 lows.

Putting the bullish outside engulfing bar from Friday into context, the continued elevation of price above its daily 8-, 13-, and 21-EMA envelope while both daily MACD and Slow Stochastics trend higher suggests that prices could still rally. Conversely, putting today’s developing inside bar shooting star in context, traders are signaling that they’re not ready to commit to more gains. Nevertheless, these observations may mean little in the face of the ‘Brexit or bust’ mindset the markets have been in. 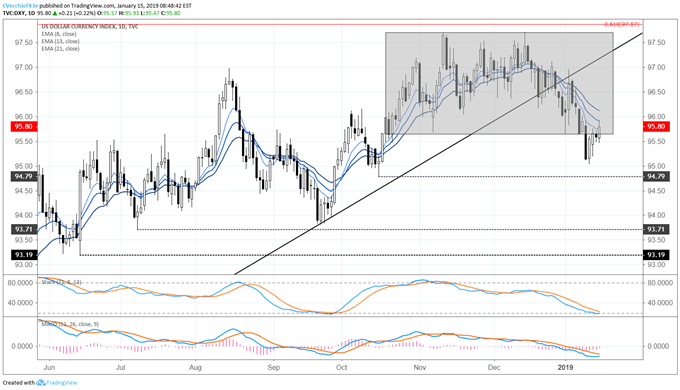 Yesterday’s inside day gave traders a reason to doubt the prior two-day rebound, but further gains today puts the DXY Index back in the near-three-month consolidation above 95.65 range support. Given that price remains below its daily 8-, 13-, and 21-EMA envelope, and that both daily MACD and Slow Stochastics continue to point lower as they trend deeper into bearish territory, downside resolution is still eyed for the US Dollar. It should go without saying, though, that as the third-largest component of the DXY Index, a big move in GBP/USD surrounding the Brexit vote could easily upend any near-term technical structure.