- Despite breaking its uptrend from the September low, the DXY Index's symmetrical triangle since November remains in place.

- The bullish outside engulfing bar yesterday came amid a breakdown in the Brexit negotiations; US Dollar fundamentals otherwise weak given soften Fed stance towards rate hikes.

The US Dollar (via the DXY Index) turned sharpy higher at the start of the week, boosted by the worst loss by GBP/USD in over two-years. Now that the Brexit vote for today has been canceled, fears of a 'hard Brexit' or 'no-deal Brexit' have been revived. With the EU seemingly unwilling to renegotiate a deal, the dichotomy at present time truly may be May's way or the highway.

The next steps forward could still prove perilous for the British Pound. For UK PM May, a no confidence vote seems likely, and if the prime minister falls, then a general election could ensue (Tory infighting is proving counterproductive). Otherwise, if May survives, now that European Court of Justice has ruled it’s legally feasible, it’s possible that a May-led revokes Article 50 and proceeds with a second referendum.

A no-deal Brexit - or no Brexit at all, after a second referendum - is very possible. Two-way volatility in the British Pound should remain elevated for the near-future. To be clear, trading the British Pound at present time is no different than rolling dice in a casino: good luck with that gamble.

The fact of the matter is that the turn for the worse in the Brexit negotiations serve as a bullish catalyst for the DXY Index, even if the US Dollar's own fundamentals sour against it (the Fed's 2019 rate expectations have been trending lower). Data in recent weeks has been generally disappointing, with the US Citi Economic Surprise Index falling back from its Q4'18 high of +14.0 on November 16 to -5.6 today.

November US CPI to Impact Fed Meeting Next Week

While the US economic calendar is light for the rest of the North American trading session, focus will be on the upcoming November US Consumer Price Index report due out on Wednesday. Inflation data for November will show that both measures of the US CPI remain above the Federal Reserve’s medium-term target of +2%, even as the headline figure is exhibiting disinflation. The inflation report on Wednesday will only enhance expectations that an adjustment away from the preset policy course is coming next week. 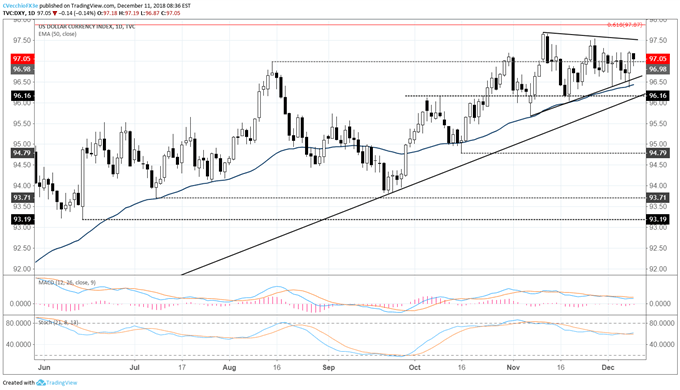 The bullish outside engulfing bar established yesterday in the DXY Index has given bulls a fresh reason to look higher. But an honest assessment of the situation reveals that further upside is just as likely as further downside from here. The uptrend from the September, October, and November swing lows has broken, suggesting a weakening of topside momentum. For now, the symmetrical triangle in place since the end of November remains the prime focus; consolidation dictates patience and open-mindedness to outcomes on both sides.

For bulls, the November 28 bearish outside engulfing bar at 97.54 would need to be cleared out in order to validate a bullish breakout. Conversely, given that the bullish outside engulfing bar's low from yesterday came in at the daily 50-EMA - a level of trend support tested and held on numerous occasions since first breaking above it on September 27 - validation for a bearish breakout would need to come in below 96.36. Further confidence in a breakdown would be instilled with a move below the November 20 low at 96.04.