- After a reprieve yesterday, US-China trade war concerns are materializing again after the latest Chinese trade balance report showed that its surplus with the US widened; USD/CNH was back near its highest close of 2018.

- US President Trump's comments on the state of Brexit have rekindled concerns about the viability of the Theresa May government; GBP/USD is at its lowest level since July 3.

The US Dollar (via the DXY Index) is pacing to gain everyday this week and due to post its first string of five consecutive up days since May 14 to 18. With trade concerns have been seemingly ebbing and flowing every day in recent memory, attention remains focused on any new developments on the US-China trade war front.

The offshore Chinese Yuan is weakening once again as market participants are divining the next move's in the US-China trade war based on recent trade data. While some of the growth figures from the world's second largest economy have been less than impressive recently, what has stood out is the fact that China's trade surplus with the United States just grew to a new record surplus.

Given that US President Trump has turned his attention to countries that enjoy trade surpluses with the United States - Canada, China, Germany, Japan, among others - it would be logical to suggest the latest Chinese trade figures will not help ease tensions any further. Instead, it seems likely now that US President Trump will push harder for the new tariffs on $200 billion of Chinese goods, even if China is trying to back away from the 'tit-for-tat' type of negotiations.

Elsewhere, the British Pound is suffering as US President Trump and UK Prime Minister May convene in London. Ahead of the US president's arrival, a wide-ranging interview was published in The Sun that was nothing short of an exocriating critique of how Brexit has gone under the current UK government's watch.

Saying that a UK-US trade deal would be off - one of the reasons Leavers said would help soften the blow of a Brexit - US President Trump may have just poured fuel onto the fire of whether or not the May government will last following the wave of resignations last week. While still unlikely, a collapse of the May government ahead of the August Bank of England meeting could prove to provoke another hold in rates, setting the Sterling up for disappoint down the road. 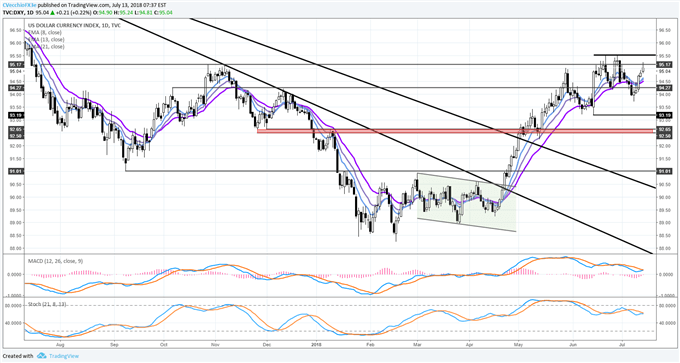 Overall, as has been the case throughout the week, the US Dollar's (via DXY Index) technical posture continues to improve, but isn't fully bullish on a momentum basis just yet. Price continues to hold above the daily 8-, 13-, 21-EMA envelop in sequential order as the DXY Index has now moved up to its highest level since July 2.

Daily MACD and Slow Stochastics both remain in bullish territory and are on the cusp of issuing 'buy' signals, suggesting that a return to the recent highs is possible. A move through the June 21 bearish daily key reversal and June 27 to 29 evening doji star candle cluster highs at 95.53 is necessary to truly reinvigorate US Dollar bulls.