- EUR/USD suffered its worst drop of the year yesterday following the ECB's dovish taper of its QE program.

- The DXY Index rally has run into resistance at the 2018 high, as well as the swing highs in July, October, and November 2017.

- Retail traders are once again net-short the US Dollar across the board, a contrarian bullish signal.

The US Dollar (via DXY Index) has rallied to its highest level of 2018 following the trio of central bank meetings this week, the Federal Reserve on Wednesday, the European Central Bank yesterday, and the Bank of Japan today.

Policy divergence is clearly in the spotlight, as the Fed plans on pushing forward with a 25-bps rate hike every three months through the end of 2019, while both neither the ECB nor the BOJ expected to raise rates at any point over the next year. The earliest a tightening move is being priced in for either the ECB or the BOJ comes in September 2019, by which point the market is already pricing in at least four more Fed rate hikes. 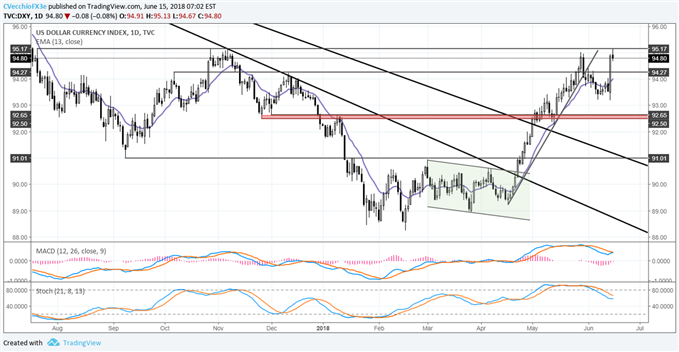 The stark realization of the policy divergence yesterday produced the best day of the year for the US Dollar and the worst one for the Euro. The DXY Index today was able to briefly move back to its yearly high, resistance that coincides with the swing highs established in July, October, and November 2017.

Bullish momentum is reasserting itself for the DXY Index, with price now treating trading back above the daily 8-, 13-, and 21-EMA envelope. MACD and Slow Stochastics are starting to turn higher again in bullish territory. A close through 96.17 would signal that that next leg higher for the DXY Index is under way.

For now, traders may wait to see how developments around the China-US trade war unfold before a concerted break higher is achieved. Overight, the US announced $50 billion of tariffs on Chinese goods, and it was rumored that up to $100 billion of tariffs is also being prepared. Historically, an escalation in the trade war has proven to be a negative for the US Dollar.

The ECB's dovish QE taper (no plans on raising rates until summer 2019 at the earliest) proved to be a loud wake up call for market participants. US-German yield spreads continue to widen out to all-time record levels, and the bill has come due for EUR/USD now that policy divergence is being examined under a microscope. 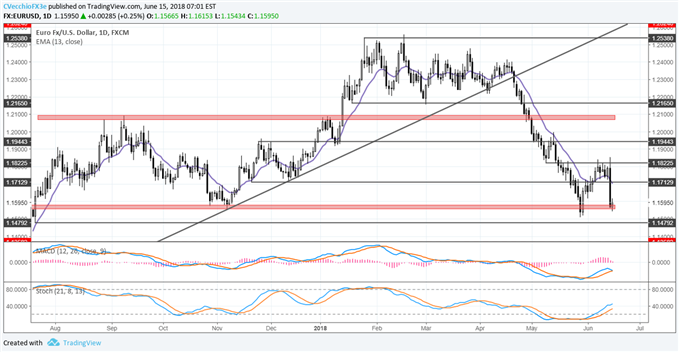 With a bearish engulfing bar (or bearish key reversal, depending upon your perspective) forming yesterday, price action has quickly resolved itself to the downside. The bearish momentum profile is gaining clarity, with EUR/USD trading below its daily 8-, 13-, and 21-EMA envelope. Concurrently, both MACD and Slow Stochastics are turning lower in bearish territory. A move back to the yearly low of 1.1510 can't be ruled out from here; a break would target the July 2017 swing low at 1.1479 initially.