- The US Dollar turned higher following the data, with the DXY Index rising from 88.83 to 89.07, at the time this report was written.

The first jobs report of 2018 has given the US Dollar some much needed breathing room. The greenback rallied after the January US Nonfarm Payrolls report showed that the US economy added +200K jobs in January, beating expectations of +180K. Other parts of the report suggested an overall sturdy labor force. Even though the unemployment rate (U3) held at the cycle low and 17-year low of 4.1%, the labor force participation rate held at 62.7%.

To that end, the most important part of the jobs report was the wage growth figure, not the headline jobs figure. Coming in at +2.9% y/y, the highest rate since May 2009, there is growing evidence that with the economy at “full employment,” higher wages are being generated (as the Phillips Curve implies), and thus, inflation. The combination of higher wages, rising energy prices, and a weak US Dollar should boost inflation expectations and thus keep US Treasury yields pointing higher.

As far as near-term rate hikes are concerned, this report has had minimal impact. Fed funds rate expectations continue to price in March 2018 for a rate move, with hike odds holding at 99% after the data. Rates markets are now pricing in additional hikes in June (77.3%) and September (51.2%). There are growing odds of a fourth rate hike this year in December as well (now 30.4%).

Overall, the January US Nonfarm Payrolls report was strong throughout and should improve the US Dollar’s standing, both fundamentally and technically (per the DXY Index). 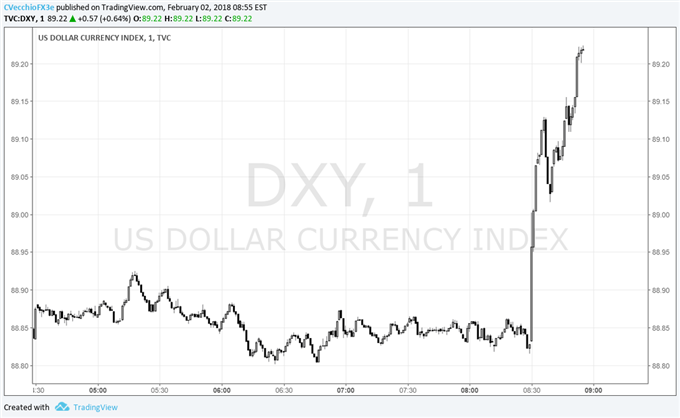 Immediately following the data, the US Dollar traded higher versus the Euro and the Japanese Yen, with the Dollar Index (DXY) rising from 88.83 ahead of the data, to as high as 89.22. The US Treasury 10-year yield reached as high as 2.840%, a four-year high following the data release, fueling broad US Dollar gains. EUR/USD was trading at 1.2440 and USD/JPY was trading at 110.35 at the time this report was written.

Read more: US Dollar Inches Higher on Back of January FOMC Policy Statement