- The DXY Index finds itself back at its weekly open today, thanks largely due to an economic calendar without any motivating data releases this week.

- Since the break of the inverse head & shoulders neckline on October 26, DXY Index has been playing ping pong between 94.29 and 95.17.

The US Dollar (via DXY Index) is trading right back to its weekly open, as a lack of clear drivers on the calendar leaves the greenback waiting for catalysts to cross the news wires. The greenback isn't alone in this endeavor, as neither the British Pound nor the Canadian Dollar nor Euro have data releases due out that could be considered "materially important."

While there may not be any data worth paying attention to the remainder of the week, the specter of tax reform legislation has been, and will be, the key source of influence for the US Dollar in the days ahead - particularly before the Thanksgiving holiday in two weeks, when an unofficial, soft deadline for tax reform has been set by Republican leadership in Washington, D.C.

Since trading into this range on October 26, the DXY Index has yet to close outside of it. Generally, while the DXY Index's technical posture remains bullish (price above the daily 8-, 13-, and 21-EMA envelope, and MACD and Stochastics in bullish territory), this may not be the time to establish fresh longs as we wait for resolution of the near-term range. 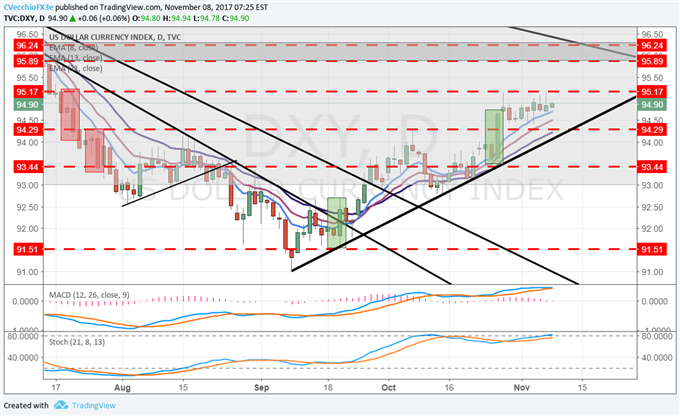 Elsewhere, focus should stay on the Asia-Pacific region as it has thus far this week thanks to the other of the two major central bank decisions concluding before markets close in the US for the day. The Reserve Bank of New Zealand's November policy meeting (today in New York, tomorrow in Wellington)

Once again, the main way the RBNZ has the potential to hit the Kiwi is via commentary on the exchange rate. In the meetings since June, the RBNZ has noted to some extent that “A lower New Zealand dollar would help rebalance the growth outlook towards the tradables sector.”

However, the New Zealand Dollar has traded mostly lower over the interim period since the last RBNZ meeting, particularly following the election of Jacinda Ardern as New Zealand PM. The Q3’17 inflation report remains the most recent set of price data on the economy we have, and showed that will price pressures remain below the RBNZ’s +2% target, they are rising once again (+1.9% from +1.7% (y/y/)).

If there is a shift in tone from the RBNZ (unlikely given the influence of exogenous drivers like Ardern's election and its knock-on effects), it will only be a small, incremental shift in the hawkish direction. Rates markets are not pricing in any shift in policy for the remainder of 2017, and the first chance of a move isn’t being given serious consideration until August 2018 at the earlier (57% chance of a rate hike).

See the above video for technical considerations in the DXY Index, EUR/USD, GBP/USD, AUD/USD, USD/JPY, USD/CHF, and NZD/USD.