- A surge higher by Gold and the Japanese Yen, and a swoon in US yields suggests traders are indeed seeking safety positions ahead of the long weekend as geopolitical tensions rise in Asia.

- Event risk over next 24-hours caters to likely volatility in AUD/USD, AUD/JPY, USD/CAD, and CAD/JPY.

- See the entirety of the DailyFX Q2'17 forecasts - important reading for the holiday weekend!

FX and commodity markets are offering a fairly ominous warning to global financial markets: seek shelter from the incoming storm. When non-market/geopolitical risks are rising, particularly around holidays, traders begin to take shelter in safe haven assets like Gold or the Japanese Yen. No one who will be away from their desk for an extended period of time wants to be caught on the wrong side of a surprise, negative development. The fact that we've seen Gold, the Yen, and US yields all move in tandem shouldn't be taken lightly.

Ahead of the holiday weekend (and potential escalation between North Korea and the United States), there are still a few data/event hurdles to clear. Over the next 24-hours, event risk dictates that more attention should be paid to the Australian and Canadian Dollars. 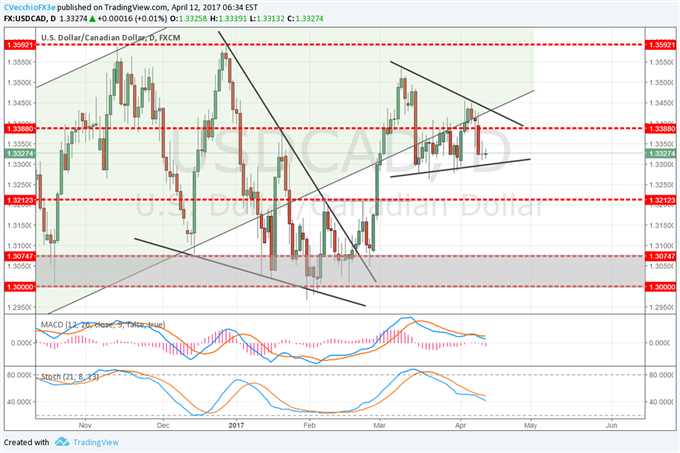 The Bank of Canada's meeting today (results due out at 10 EDT/14 GMT) should result in at least two-way volatility, if not direction, in CAD-crosses. The BOC has been in a neutral stance since December, and that doesn’t appear poised to change later this morning. The BOC is widely expected to keep rates on hold at 0.50% despite recent labor market data starting to come in consistently above expectations. The key issue for the BOC will likely be the lack of demand-pull inflation, or higher prices resulting from faster rates of consumption. Recent figures from Statistics Canada showed that wage growth has remained below +2% for 28 consecutive months, and overall wage growth is at its lowest since 1990.

Overnight, Australian labor market data is due, and it could have direct implications for AUD/USD, which currently is sitting at the bottom of a three-month range (which, if broken, points towards a move in the low 0.7200s). Bloomberg forecasts suggest that Australian employment increased by +20.0K in March after declining by -6.4K in February. February’s decline was the first month of losses since September. Additionally, the unemployment rate is expected to remain on hold at 5.9%. 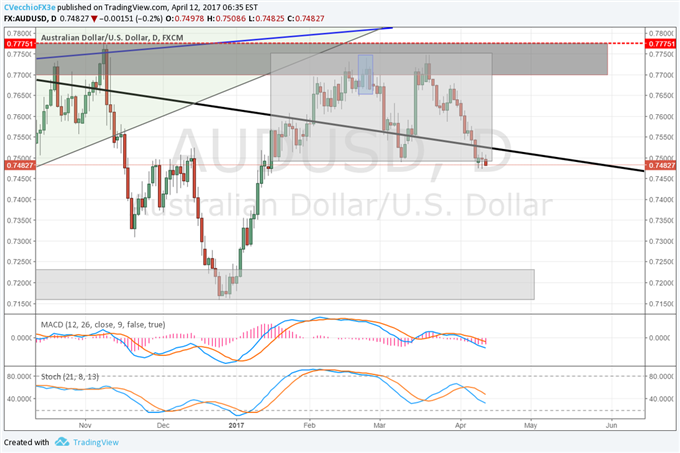 The uneven pace of jobs growth appears to be a wrinkle in the outlook for the Reserve Bank of Australia, which last week noted that wage pressures aren’t strong enough to provoke a rate hike any time soon. Coming into this week, interest rate expectations (per overnight index swaps) showed only a 6.7% chance of a hike by December 2017, while there was a 22.3% chance of a rate cut.

See the above video for a technical review of the DXY Index, EUR/USD, USD/CAD, AUD/USD, USD/JPY, AUD/JPY, CAD/JPY, Gold, and Silver.