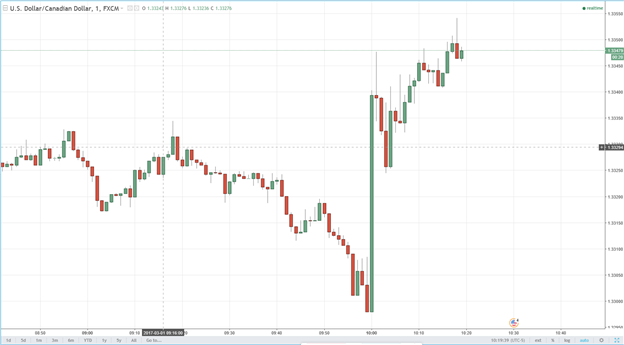 - Benchmark rate remains at 0.50% as per Bank of Canada decision.

- Canadian Dollar falls against the US Dollar; USD/CAD back near daily highs.

The Bank of Canada decided to leave the overnight benchmark interest rate unchanged at 0.50%, as was widely expected by market participants; none of the 20 economists surveyed by Bloomberg News called for a rate move. The BOC said that subdued wage growth in the labor market has lead to “persistent economic slack,” while also citing “significant uncertainties” weighing on their economic outlook as reasons for keeping rates unchanged.

The BOC has had a tough job balancing sluggish growth against highly skewed home prices, particularly in Toronto and Ontario. Elsewhere, the recent spike in the Consumer Price Index at +2.1% in January vs +1.5% in December indicates that prices are rising faster than anticipated. The BOC has citation that there is significant uncertainty clouding their economic outlook may be due to questions towards US trade policy under the Trump administration.

As far as market pricing goes, overnight index swaps are currently suggesting that the Bank of Canada will keep rates on hold throughout 2017, with only a 36% chance of a hike by December.

Immediately following the data (and spurred on by the strong February US ISM Manufacturing report), the US Dollar spiked against the Canadian Dollar, and continued on a strong uptrend that’s guided price over the past few days. USD/CAD rose from 1.3298 ahead of the release to as high as 1.3354 thereafter. At the time this report was written, the pair was trading at 1.3349.