Preview for February NFPs and Implications for the US Dollar

- Euro and Yen likely to move in same direction around NFPs.

It's the second US labor market report of 2016, and its coming less than two weeks ahead of the Federal Reserve's March policy meeting - one in which their previously outlined policy path suggested would be memorable for its 25-bps rate hike. Alas, that's simply not the way markets see it: there's only an 8% chance of a rate hike in March and one priced in by December overall:

Ultimately, it looks like the FOMC is shaping expectations for two rate hikes this year, one in June and another in December. Today's NFP print can help cater to or work against the market pricing that in today; the FOMC will probably lay out that path at the March meeting anyhow. A strong NFP print brings forward that catalyst; a weaker one delays it. For the US Dollar, it needs more than another 'goldilocks' report.

The key question today is thus: is US labor market strength strong enough to boost Fed rate hike optimism afloat? Current expectations for today's data are only decent, with the Unemployment Rate expected to hold at 4.9%, and the headline jobs figure to come in at +195K after January's disappointing +151K. Wage growth figures are due to come in at +2.5% y/y.

The market consensus for today's NFP release seems to be reasonably muted. The two inputs used in the 10-year Nonfarm Payroll Regression Model, ADP Employment Change and the ISM Services Employment sub-index, have both subsided in recent prints. As a result, the regression model is forecasting February Nonfarm Payrolls at +182K. I’ve also included the summary table on the stats. 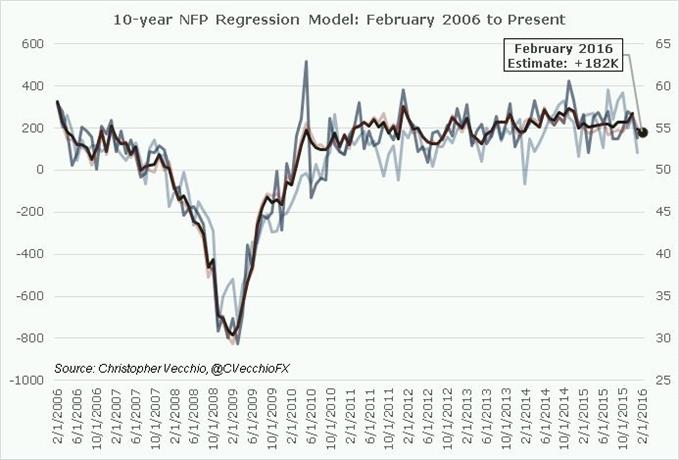 Note: these are publicly available data, and a basic form of analysis is being used, so these findings aren't necessarily unique.

Another middling print may prove to be better for risk assets than the US Dollar: signs that the US economy is still chugging along (albeit at a slower pace than desired - at least its not tilting into a recession quicker) mean the Fed will be more patient, keeping the low rate happy hour going for just a bit longer.