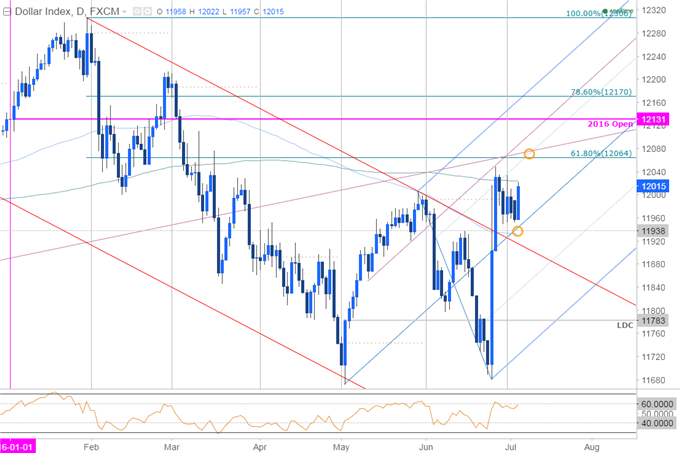 Tomorrow is the release of the minutes from the latest FOMC policy meeting and although we’ve already seen Chair Yellen’s presser touch on the underlying concerns plaguing the central bank, market participants will be looking to the minutes to highlight the depth of these fears within the committee. Some topics to pay close attention to are:

Technical Outlook: Heading into the release tomorrow, the U.S. Dollar Index remains within the confines of an ascending median-line formation extending off the 2016 lows. As noted in today’s webinar, the index rallied through the weekly & monthly open with the advance losing steam just ahead of the 100-day moving average at 12023. Seasonality’s turn rather bearish for the greenback heading into the July trade & the rally is vulnerable heading into a key resistance confluence at 12064/75.

Interim support rests at the weekly opening range low at 11953 backed by the median-line / 100-day m moving average at 11932- bullish invalidation. A break below former channel resistance / now support would be needed to validate a reversal lower in the index. Continue tracking this setup and more throughout the week- Subscribe to SB Trade Deskand take advantage of the DailyFX New Subscriber Discount. 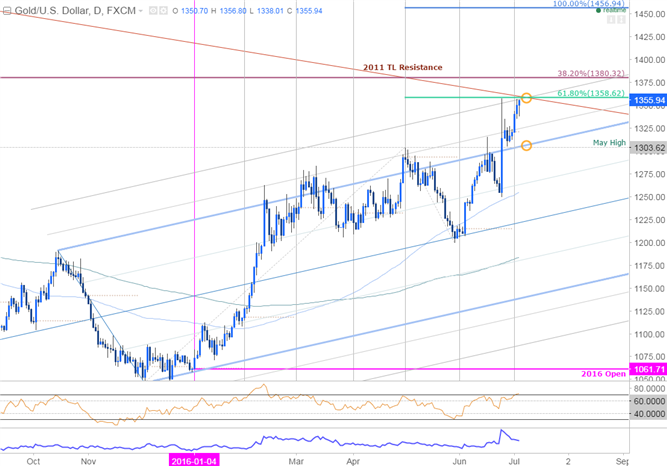 Technical Outlook: Gold is approaching a critical resistance confluence ahead of tomorrow’s release at 1359- this level is defined by the 61.8% extension of the advance off the 2015 low, the 1.618% median-line parallel of the ascending structure and a longer-term trendline resistance extending off the 2011 high. The advance is vulnerable near-term while below this range with interim support seen at 1321 (monthly open) backed by the May high at 1303 (near-term bullish invalidation). A breach above targets subsequent resistance targets at the 38.2% retracement at 1380 & 1400. 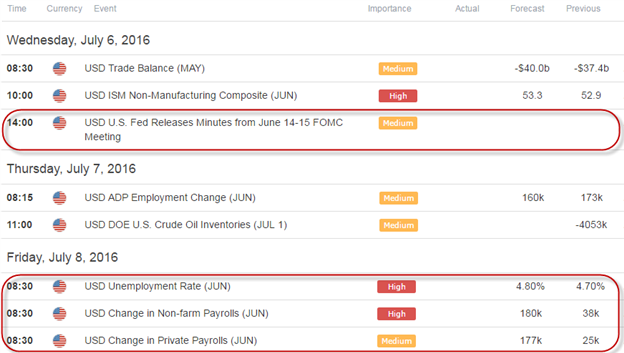