Gold Prices on Course for Worst Month in Over a Year, More Pain Ahead for XAU/USD?

Gold prices weakened over the past 24 hours, sending XAU/USD close and closer towards the 2021 low at 1676. In fact, July has been quite a dismal month for the yellow metal so far. If losses hold at the time of writing, gold is looking at a 6.4% loss in July. That would be the worst monthly performance in over a year.

More surprising, the precious metal has been unable to capitalize on a softer US Dollar overnight. The DXY Dollar Index is on course for its worst week since late May if losses hold until the end of this week. Rosy stock market sentiment is likely driving demand away from the haven-linked currency.

Gold tends to have an inverse relationship with the US Dollar, as well as government bond yields. The latter is largely dictated by what the Federal Reserve does. Due to aggressive monetary tightening and surging yields this year, gold’s appeal has been diminishing.

It would likely take a meaningful turnaround in global monetary tightening to revive much demand for gold, thus making it a tough road ahead for the yellow metal. That might be too much to ask for at this time. All eyes are on the European Central Bank later today, which is expected to raise interest rates.

On the daily chart, gold has confirmed a breakout under the September 2021 low at 1722, inching closer towards the 2021 low at 1676. The latter could play out as key support, with the 20-day Simple Moving Average aiming lower. This line could hold as resistance in the event of a turn higher, perhaps reinstating the broader downside focus. Further losses place the focus on the 78.6% Fibonacci extension at 1656. 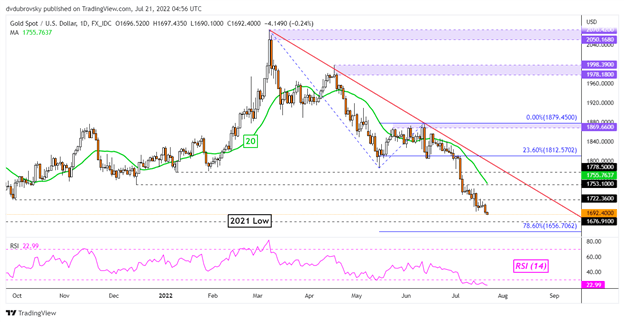 The IG Client Sentiment (IGCS) gauge shows that about 89% of retail traders are net-long. IGCS tends to behave as a contrarian indicator. Since the vast majority of investors are biased to the upside, this suggests prices may continue falling. Downside exposure has declined by 3.98% and 21.26% compared to yesterday and last week respectively. With that in mind, the combination of current sentiment and recent changes is offering a stronger bearish contrarian trading bias. 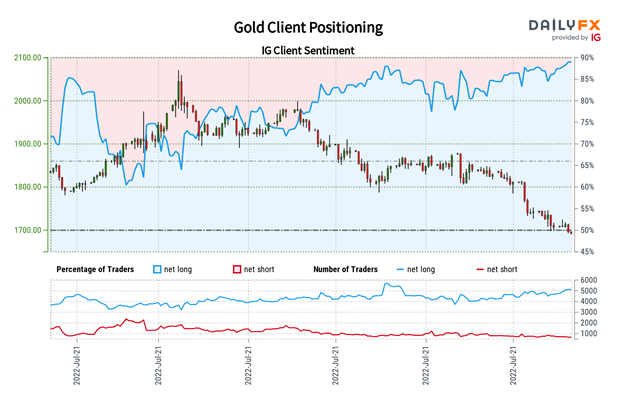